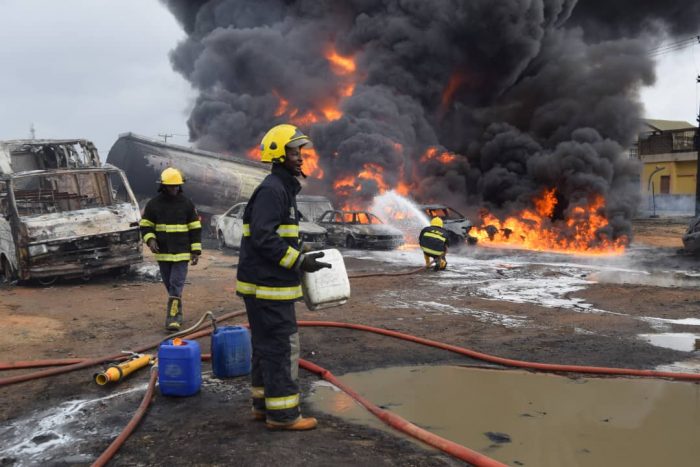 The Nigerian National Petroleum Corporation (NNPC) has directed its team of engineers to immediately investigate and commence repairs of Thursday’s pipeline explosion allegedly caused by vandals at Ijegun, a Lagos suburb.

Mr Ndu Ughamadu, the Group General Manager, Public Affairs of NNPC told the News Agency of Nigeria (NAN) on telephone in Abuja that the explosion was caused by vandals and the Group Managing Director, Dr Maikanti Baru, has directed the corporation’s team of engineers to resume at the fire scene and redress the situation.

According to Ughamadu, “The fire was ignited when some vandals were scooping fuel from the pipeline.

Similarly, the National Emergency Management Agency (NEMA) said that the pipeline incident which occurred in the early hours of Thursday at Ijegun, in Lagos was caused by vandals.

Mr Ibrahim Farinloye, South-West Coordinator of NEMA told NAN on telephone that NEMA alerted the management of the NNPC on the early morning incident and fire outbreak.

Farinloye said that NEMA also called on the Safety Unit of the NNPC to immediately shut down further supplies through the pipeline, in order to suffocate the fire.

“It is noted that vandals are responsible for the incident and some of them were burnt to death in the inferno.

“Security agencies have also condoned off the area and residents of Ijegun have been urged to remain calm.

“Pipeline fire is a specialised aspect of fire management and not all firemen can handle it.

“The NNPC safety firemen are specially trained to handle such delicate incidents and that is why NEMA immediately mobilised the NNPC to mobilise to the scene.

“It will, however, take time before the inferno can be effectively tackled and supply to the pipeline is weakened and disabled,’’ he said.

Farinloye said: “In as much as the lives and property of the people are not threatened, the fire will be put off as soon as the safety of the fire officers is also assured’’.

However, NAN gathered that two people have been confirmed dead and about 30 vehicles burnt in the incident.