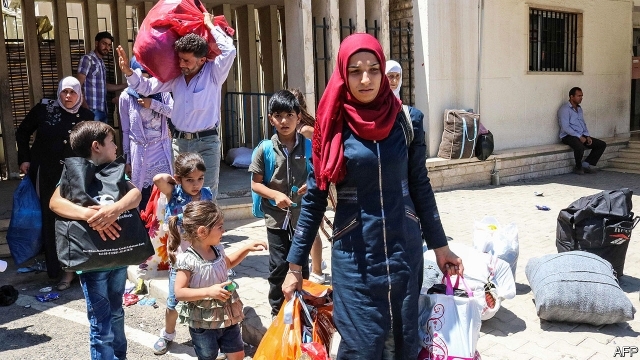 Nearly 2,000 Syrian refugees have returned to their home country from neighboring Jordan and Lebanon within the past 24 hours, according to a reconciliation center in the Russian defense ministry.

The Russian Defense Ministry’s Centre for Reconciliation of Opposing Sides and Refugee Migration Monitoring, which made this known on Saturday, said: “Over the past day, in total 1,979 people returned to the Syrian Arab Republic from the territory of foreign states.

“433 people (130 women and 221 children) left Lebanon for Syria via the Jaydet-Yabus and Talkalakh checkpoints, and 1,546 people (464 women and 788 children) from Jordan via the Nasib checkpoint,” the centre said in its daily bulletin.

Fourteen internally displaced Syrians returned to their homes over the given period, the bulletin added.

According to the center, Syrian engineering units removed mines from 2.9 hectares (7.2 acres) of land and destroyed 29 explosives.

Moreover, six residential buildings and one industrial plant were reconstructed over the past day.

As the Syrian government has regained control over most of the country’s territories that were seized by terrorists, it is now focused on creating favorable conditions for repatriating refugees.

Moscow is assisting Damascus in this process, along with providing humanitarian aid to civilians and being a guarantor of the ceasefire.