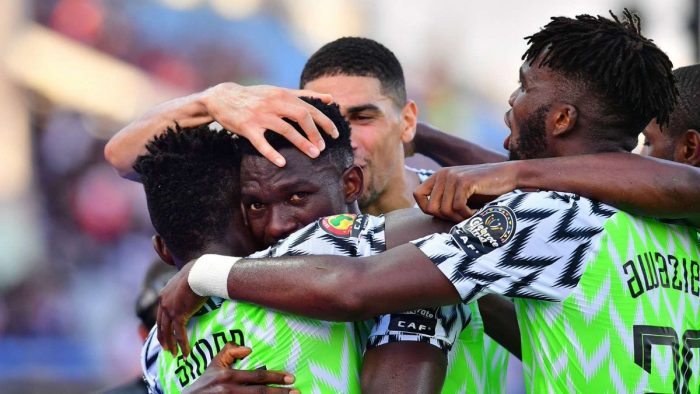 Nigeria’s Super Eagles have sent the defending champions, Cameroon out of the ongoing African Cup of Nations tournament in Egypt, coming from behind to win 3-2 to reach the quarter-finals.

A brace from Odion Ighalo and a strike from Alex Iwobi gave Nigerian the victory.

Ighalo opened scoring for Nigeria on 19 minutes. Kenneth Omeruo played the ball to Odion Ighalo, whose deflected shot from inside the box went past the helpless Andre Onana.

Cameroon came back into the game, equalising on 41st minute to make it 1-1.

Christian Bassogog sent a precise lofted cross into the box, Stephane Bahoken latched on to it and finished with a quick shot inside the right post. The goalkeeper had no chance.

Cameroon went into the lead on 43 minutes. After receiving a pass, Clinton N’Jie unleashed a shot straight into the bottom right corner.

On 51st minute, N’Jie received a precise low pass inside the box, controlled the ball and released it towards the right post. Unfortunately for him, Daniel Akpeyi made a great save to stop his effort.

On 63rd minute, Ighalo got his brace to equalise for Nigeria. Ahmed Musa laid the ball off to Ighalo, who unleashed a strong shot from close range into the back of the net, leaving the goalkeeper helpless.

Three minutes later, the Super Eagles took the lead, making it 3-2 to send millions of Nigerians into frenzy. It was Alex Iwobi who did the job.

Iwobi collected a delightful pass inside the box from Ighalo and netted with a perfect low drive into the middle of the goal.

On 78th minute, Ighalo latched on to a precise pass and one-on-one with the keeper and slammed the ball towards the right-hand post. Andre Onana was alert, though, and leapt like a salmon to deny him.

Musa, on 83rd minutes missed a good chance to score. An inch-perfect cross into the box found Musa, who rose for a header, but sent the ball well over the bar.

With 62 percent ball possession, the Cameroonian side failed to take advantage of the opportunity to win the game, but the Eagles had 16 goal attempts to Cameroon’s 12 and also had four shots on goal to Cameroon’s three.