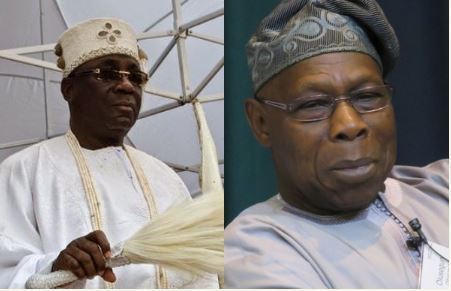 Oba of Lagos, Rilwan Akiolu on Monday said former President Olusegun Obasanjo is the number one problem of Nigeria.

Akiolu spoke at the launch of a Memoir, title: “‘Battlelines: Adventures in Journalism and Politics,” written by former Governor of Ogun State, Chief Olusegun Osoba at the Eko Hotel and Suites, Victoria Island, Lagos, Southwest Nigeria.

Akiolu said two days ago, he read Osoba’s interview in a newspaper where he said Obasanjo deceived them which was why they lost their seats in 2003.

The monarch said he thanked God that former Governor of Lagos, Asiwaju Bola Tinubu did not fall into the trap and won his re-election.

He said Obasanjo should be listened to because of deception.

“Obasanjo is Nigeria’s number one problem, Nigeria will not break,” he  said.