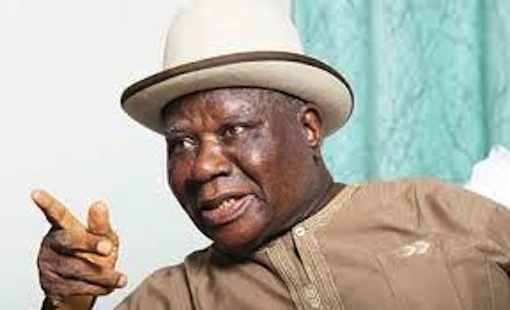 Chief Edwin Clark, a chieftain of Peoples Democratic Party (PDP) has called for truce in the tussle surrounding the emergence of minority leadership in the House of Representatives.

Clark urged his party, the PDP to face issues of national interests as the main opposition party and allow peace to reign in the 9th Assembly.

Clark in an interview with newsmen on Sunday in Abuja said that the tussle was unnecessary, advising the PDP to accept the Ndudi Elumelu as announced by the Speaker of the House Assembly, Hon. Femi Gbajabiamila.

PDP had on Friday suspended Elumelu and six other members of House of Representatives for one month over their alleged involvement in the crisis.

Clark said that there were major issues in the country that PDP should concern itself with.

“I believe that if there are about 141 opposition members in the House of Representatives and 121 of them belong to PDP, the other 20 members are members of the House and they must be consulted.

“So if the members of the House who are in opposition all agree that this is what we want to do, I will appeal to PDP to face larger problems in this country.

“Ruga is there and there are many other things in this country that are going wrong. PDP should play the role of opposition effectively in those areas and leave this matter. It is done.

“If the Speaker has already announced that this is the minority leader now there is nothing anyone can do.
Otherwise, you want to create problem in the House which should not be.

“So, I am advising the PDP leadership that now that they have suspended them for a month, that may be enough sanction. Allow what has happened in the House to go on. They are all members of the PDP,” he said.

The elder statesman said that there was no place even in the PDP constitution which says it should nominate people and forward to the House, saying “the National Assembly has its rules and regulations.

He went further that, “Rule 8 of the NASS, I think, says that elected members of the House whether they are majority or minority should sit among themselves and elect their members.

“They did not say that one political party should nominate people for the chairman or secretary to come and submit to NASS.

“I don’t think there is anything like that. But the party has to be in the know, I agree. But the whole thing that happen, we should be thinking about major things.”

He said that the PDP established the precedent in the 7th NASS when the speakership position was zoned to the South West, and Aminu Tambuwal, North West contested and won, against the wish of the party.

“Everyone of one of us went to the House including PDP Board of Trustees Chairman, Late Chief Tony Anenih, the Secretary to the Government of the Federation and many PDP members were there and an election was conducted among the lawmakers.

Mulikat Akande, who was the party’s choice agreed to contest and PDP allowed the elections to go on and the end, Tambuwal won and Emeka Ihedioha became his deputy. Heavens did not fall.

“Commonsense prevailed and they moved on but again, that was the beginning of the problem of the PDP. When at the end of it, Tambuwal for reasons best known to him defected,” he said.