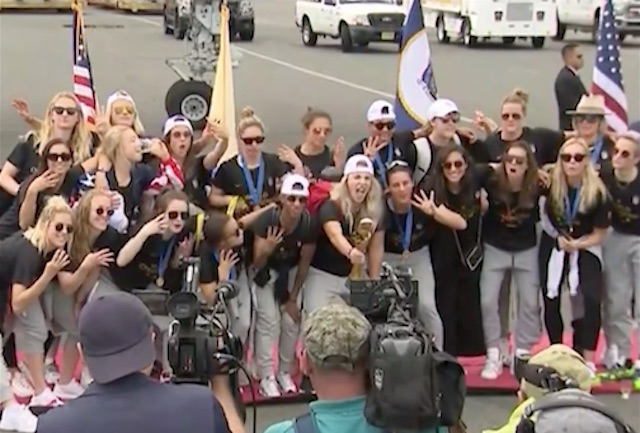 US Women's soccer team in Newark on Monday

The United States’ Women’s World Cup-winning team arrived Newark on Monday, a day after clinching a record fourth title in the football showpiece.

The jubilant US women, who defeated the Netherlands 2-0 in Sunday’s final in France to seal back-to-back World Cup victories, touched down at Newark Liberty International Airport on a chartered jet.

Striker Alex Morgan and player of the tournament Megan Rapinoe were among the first to exit the aircraft, where a red carpet had been unfurled to greet the team as they stepped onto the tarmac.

Many of the players, who had been seen raucously celebrating Sunday’s victory in various videos posted on social media, wore dark glasses as they greeted well-wishers upon arrival.

The party mood continued as the players danced and sang Queen anthems “We Are the Champions” and “We Will Rock You.”

The team were then ushered onto a waiting bus before being whisked to New York, where the squad will be honoured with a ticker-tape parade on Wednesday.