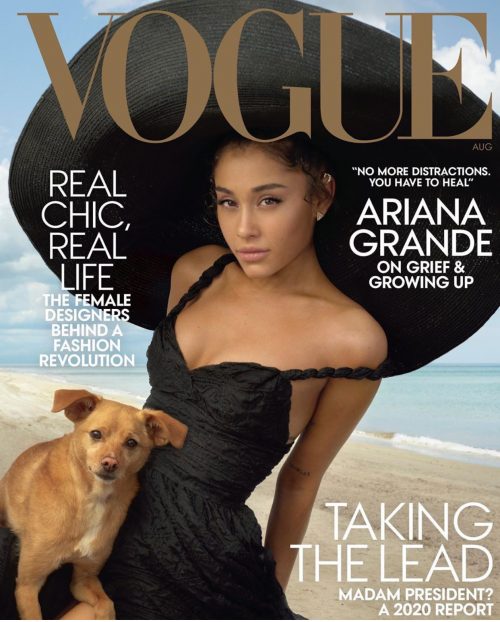 Ariana Grande has stirred controversy over her toned look as she graces the cover of Vogue magazine’s August 2019 issue.

The 26-year-old, known for her oversized clothing and long ponytail, is showcasing a more tanned complexion of herself on the cover. Seen alongside her famous dog, Toulouse, and beneath a giant hat, Grande is surprising people with visible wisps of her naturally curly hair. But some have been more taken aback — and downright upset — about her skin colour.

In her cover story, the singer talks about “having my funny character that I play,” with her often heavy makeup and bubbly clothing. But throughout the comments of Vogue’s Instagram post of the cover, people are criticising this seemingly new look.

“Noooo, sorry this is not ok. Ari does not look like this at all,” noted one commenter, with others claiming, “All I see is plastic surgery,” and, “I didn’t recognize her!”

However, a number of those weighing in went so far as to say that Grande’s complexion is misleading, and even controversial.

“When did she become black?” and “Why is she brown?” two commenters questioned. Another wrote, “Why tf does she look like a woman of colour tho? Chill with the tanning Ari.”

Still, plenty of Grande’s fans, known as Arianators, came fiercely to her defense, with one writing, “It looks like her to me, it’s Summertime, she peeped a tan, and her hair isn’t in that ponytail, stop reaching people.” Another told critics to “chill the hell out.”

“She seems so natural, I love this,” one wrote, while someone remarked, “God really is a woman.”