Sanwo-Olu: Why I didn't visit scene of Ijegun pipeline explosion 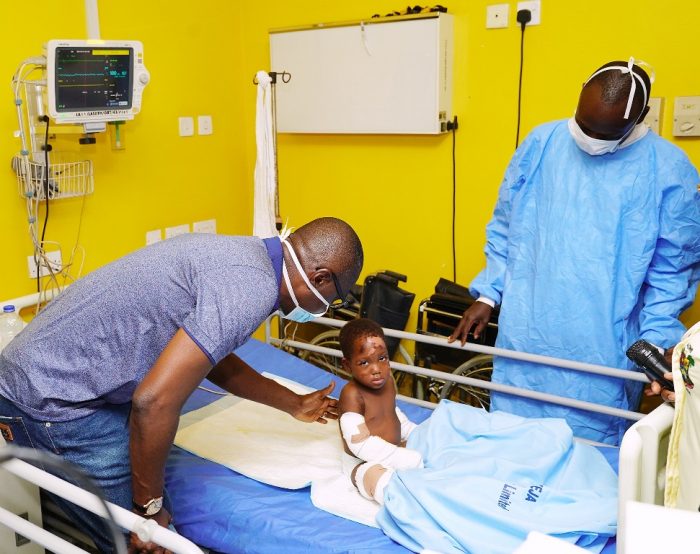 Lagos State Governor, Babajide Sanwo-Olu on Wednesday gave reasons why he and his deputy, Dr. Obafemi Hamzat did not visit the scene of the recent Ijegun pipeline explosion.

He spoke when he visited victims of the Ijegun pipeline fire incident who are receiving treatment at the Trauma and Burns Unit of the Gbagada General Hospital.

The governor cleared the air on why he did not visit the scene of the fire incident, saying that he did not want to make a camera show at the scene.

The issue of pipeline vandalism is a criminal issue being dealt with by the Federal Government. For us in the state, my deputy and I did not visit the site of the incident, because we didn’t want to make a camera show at the scene. This is not because we don’t have empathy or we are not doing what is required of us; it is a crime scene and security operatives are at the site for investigation. We don’t want to disrupt that process,” he said.

However, Sanwo-Olu sympathised with families of the victims and also appraised recuperation of the survivors.

The governor took time to go round the three wards where some of the victims were receiving treatment for various degrees of injuries.

Among the survivors are three children and four adults.

While describing the incident as unfortunate, Governor Sanwo-Olu bemoaned criminal activities around oil pipeline right of ways in the state, stressing that the State Government would cooperate with the Federal Government to strengthen security patrol of the vulnerable areas to protect the lives of residents.

He said: “We are here to check on the survivors, who are receiving treatment and assess their healing process. Although, we had a few fatalities, there are many survivors with different degrees of burn. They are responding well to treatment. I spoke with them and assured that government will do everything to ensure they get well.

“This kind of unfortunate incident must be a lesson for all of us. We cannot continue to witness loss of lives to this kind of preventable crimes. Those who are bent on making illegal wealth at the expense of other people’s lives should have a rethink.”

Sanwo-Olu warned those engaging in pipeline vandalism to desist, saying the full wrath of the law would be brought against economic saboteurs, adding that the government had resolved to foot the bills of the survivors who are receiving treatment at the state’s medical facilities in Ikeja and Gbagada.

The governor also used the opportunity to inspect the abandoned cardiac and renal Centre located inside the Gbagada General Hospital to inspect the state of the health facility.