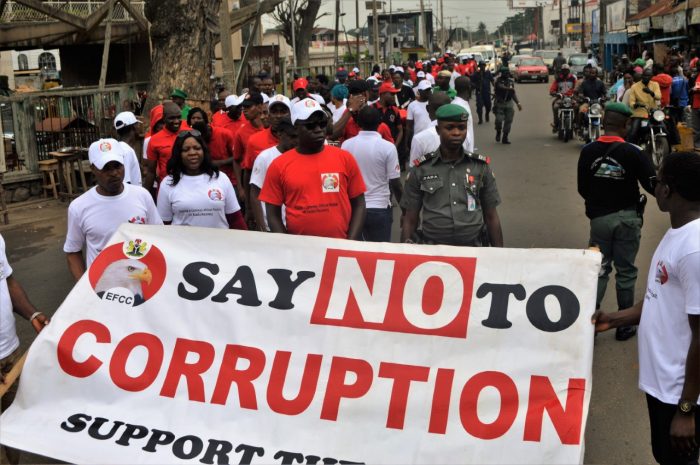 A march against corruption in Ibadan: But TI says corruption remains endemic in Nigeria

The Economic and Financial Crime Commission, EFCC, on Thursday disclosed that stolen assets of African continent in Western world worth over $50b.

The Ibadan Zonal Head of EFCC, Friday Ebelo disclosed this at the 3rd African Anti-Corruption Day, themed, “Towards a Common African Position on Asset Recovering”, which was marked with a walk across Nigeria.

Ebelo, who led his team and other stakeholders, including the media, members of the National Orientation Agency, NOA, Federal Road Safety Corps, FRSC, War Against Indiscipline, WAR, Nigeria Security Defence Corps, NSDC, Nigeria Police and Trade Union Congress, TUC, said that the stolen assets covering money, artifacts and natural resources must be recovered and repatriated back to Africa.

He noted that it was immoral if the West could be preaching transparency in the running of the African continent and they did not abide by the same concept of transparency and accountability.

He said, “Today’s event is a match in support of the African position against corruption. It is about the repatriation from the West back to Africa of our stolen goods and commonwealth. Many things were stolen away from Africa to Europe, America and other countries of the world. So with this event, we are creating awareness to the world power where most of our money is being laundered and our assets are being tied down. According to a study done before now, over $50b worth of assets from Africa alone are stolen and tied down in the West and some other countries of the world”.

“Money, artifact and other things stolen from us are our heritage and they spread across the world. We must be consistent and persistent in demanding for our stolen assets because it is our right. I believe if we do not relent, one day the comity of nations will come together and say let us do the right things.”

The EFCC Scribe pointed out that Africa did not stand to gain anything from jailing fraudsters that stole the continent’s assets alone without recovering what they had stolen for the good of the people of the continent.

He said, “As regards money laundering and related offences, you will find out that if you remove the backers of those who are involved in this act, you have virtually taken everything out of him. The concept of jailing the person who steals from us is not enough. Efforts should be made to recover at least 80 percent of the assets he has stolen to empty the thief.

“The concept of recovering of repatriation, which entails arresting a financial criminal, sentencing him into imprisonment and tracing all the things he has stolen, is the best for us. So, this time, what we are doing is that we are tracing the stolen assets beyond the shore of this nation. If we discover what you have stolen abroad and you cannot prove their ownership, automatically, the property becomes the property of the government.”

The walk, which took place simultaneously across the country, saw the team in Ibadan trekking, amidst funfair, from Iyaganku through Dugbe and to the EFCC Ibadan Office.