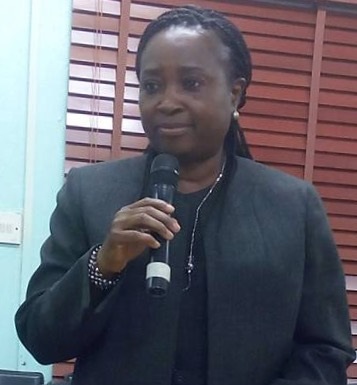 The Lagos State Public Affairs Officers and media practitioners on Thursday celebrated a former Director of Public Affairs, Ministry of Information of Strategy, Mrs Adetoro Oladapo, who retired at the age of 60.

Oladapo began her civil service career as a media practitioner with NAN in 1989 before her transfer of service to the Lagos Ministry of Information and Strategy in 2010.

The former director was celebrated at a colourful retirement ceremony, book presentation and public lecture, in her honour in Lagos.

Adeyemi said Oladapo was an Amazon, whose legacies and philosophy of life, were worthy of emulation and as a guide to the succeeding generations, in areas where she had practised.

Adeyemi urged other colleagues who are still in active service to take a cue from the career of Oladapo and equally work hard in order to leave behind a worthy legacy for posterity.

The Book Reviewer, Mr Kehinde Bamigbetan, a former Commissioner for Information and Strategy, described the former director as a straight forward person, a motivator and a leader.

The 82-page book is titled; “Toro Oladapo: Legacies of An Activist’’.

He said the book was a chronicle of the activities of the award-winning retired director, as a certified professional and a great activist of NUJ, NAWOJ and women in general.

He encouraged media practitioners and the public to read the book to know more about the great woman and the contributions, she had made to the sector.

Mr Shina Thorpe, Director, Public Affairs also in the Ministry of Information and Strategy, said the book serves as a reference material to all practising and aspiring journalists.

Mrs Adeola Ekine, Chairperson, NAWOJ, Lagos Chapter, described Oladapo as a beacon of light to many with the great values and ideas she consistently enshrined in people.

Ekine prayed that the future of the Former NAWOJ President would be brighter.

The Guest Lecturer, a Professor of Mass Communication, Lai Oso, urged government information managers to come to terms with the transformation confronting the society in the 21st century.

Oso, who lectures in the School of Communication, Lagos State University (LASU), delivered a lecture titled: “Government Information Management In the 21st Century: Issues and Challenges’’.

He said information management became necessary as the competition in the marketplace of ideas or the public sphere, was becoming deeper and more widespread.

According to him, tradition and old practices can no more meet the challenges of this period.

He said the 21st century had been shaped by many forces which had made a lot of qualitative changes in many areas including social life, institutions and processes.

He listed other forces to include: high level of political mistrust, cynicism and alienation of majority of the people, particularly the poor as well as the politics of identity.

The ceremony also featured a panel discussion which was moderated by Mr Steve Ayorinde, a former Lagos State Commissioner for Information and Strategy.

In her remarks, Oladapo appreciated her late parents, family, her superiors, colleagues and friends, for their support in building her person and career.

She said her transfer from NAN after 21 years of service to the Lagos State Ministry of Information and Strategy was the best decision she took in life.

Oladapo noted that this gave her a robust understanding of a media practitioner in the civil service and how to run a government.

She lauded her members of staff for supporting her to succeed and urged them to always sustain the unity of purpose that had been demonstrated by them.

“The Lagos Information officers have demonstrated unity of purpose in organising my retirement party and this is what I always want you to sustain.

“You have done well for me and I appreciate you all,” she said.