Artificial muscles developed by Engineers in US, China 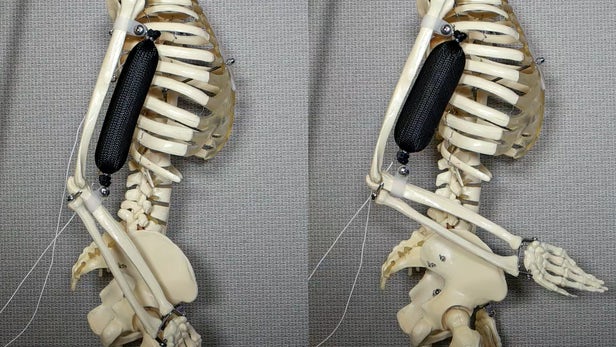 An international team of engineers in U.S. and China have developed a powerful artificial muscles which can generate a power 40 times that of human muscles.

A study published online on Thursday in the journal Science, explained that the engineers developed the muscles using a polymer sheath around inexpensive yarns.

It described the sheath-run artificial muscles in which the outside sheath absorbs energy and drives the actuation of the yarns inside.

Previous artificial muscles were made by twisting yarns, such as carbon nanotubes (CNT), fishing line and nylon thread, to the point that they coil.

Those twisted yarns can drastically contract when heated and return to initial conditions when cooled, according to the study.

“In our previous twisted and coiled muscles, we applied thermal energy to the entire muscle, but only the outer twisted part of the fiber was doing any mechanical work.

The central part was doing little, said the paper’s lead author Mu Jiuke at the University of Texas at Dallas.

Also, it takes a relatively long time to transmit the energy into the inner part of yarns, thus slowing down the muscle’s response speed,” Mu told Xinhua.

Mu said with the sheath, the input energy can be converted into the mechanical energy of the muscle more quickly and efficiently.

In the experiment, the researchers twisted the yarns while the sheath was still wet since the sheath will crack after it has dried.

They knitted them into a textile that increases porosity when exposed to moisture in order to bring more comfort to cloth wearers.