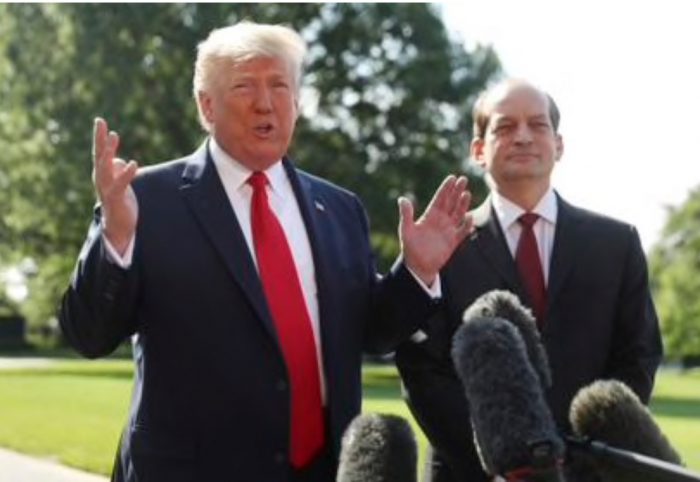 President Trump and Alexander Acosta on Friday in Washington

US Labour Secretary Alexander Acosta has resigned, a casualty of the widening sexual assaults case against billionaire Jeffrey Epstein.

Epstein is on trial in New York. accused of sexually abusing dozens of underage girls.

Acosta had faced criticism over his handling of a plea deal with Epstein, when he faced a similar charge in Florida over 10 years ago.

President Donald Trump announced the news Friday with Acosta by his side at the White House as Trump left on a trip to the Midwest.

Acosta said stepping aside was the right decision, according to Boston Globe.

Acosta was the U.S. attorney in Miami when he oversaw a 2008 non-prosecution agreement with Epstein. Epstein avoided federal charges and served 13 months in jail.

Similar charges recently filed against Epstein by federal prosecutors in New York had put Acosta’s role in the 2008 deal under renewed scrutiny.

Trump had defended Acosta but said he’d look ‘‘very closely’’ his handling of the 2008 agreement.

The deal came under scrutiny earlier this year following reporting by the Miami Herald.