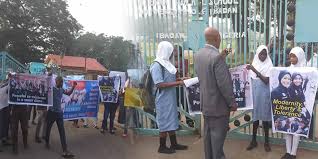 Alhaji AbdurRahman Balogun, the Chairman of the forum, made this known to newsmen on Friday during a protest held at the Bodija Housing Estate Mosque in Ibadan.

He said that the forum has also petitioned the National Human Rights Commission, Abuja; Director General of DSS, the Inspector-General of Police, the Ministry of Education and management of University of Ibadan, among others.

ISI and the Muslim parents had been at loggerheads over the rights of students to adorn hijab to the school.

Balogun said that efforts made by the parents to settle the matter out of court had proved abortive as the management of the school refused to shift ground.

He said that the institution had insisted that the status quo on the uniform must be maintained, adding they will also resist any attempt to deny their children their fundamental rights legally, legitimately and peacefully.

“The constitution of Federal Republic of Nigeria has given everyone the guarantee and any attempt to deny any of our children of such fundamental right will be resisted legally, legitimately and peacefully.

“There are appellate judgments in the case of Lagos, Ilorin, and Osun in support of hijab right and we are just awaiting the judgment of the Supreme Court on it.

“We expect that a Nigerian and in a public-owned school, even if it is privately owned, you have to obey the constitution of the Federal Republic. And this is our point,’’ he said.

Balogun said that they were compelled to petition the NHRC, DSS, police, Ministry of Education and UI management having seen that the issue was leading into a dangerous height.

He alleged that their kids in the school were now been attacked and parents harassed, such situation was getting too dangerous.

Balogun announced that they have refilled a case against UI, ISI management, Mrs Phebean Olowe, and the DVC (Academic), Prof E.B. Ekanola, saying they would have been served the court proceedings.

“We have refiled our case against the UI, ISI management, Mrs Phebean Olowe and the DVC (Academic), Prof E.B. Ekanola. We have filed 11 different cases in line with the details of the court and they would have been served the court proceedings,’’ he said.

He regretted that the forum had three meetings to settle out of court with the ISI management, but the school refused to shift ground even when parents demanded to know the mode of dressing the school wants in terms of shape, mode, colour, and size, among others.

Balogun said the school had been unwilling to shift ground, insisting that status quo must be maintained.

“There is nothing in the ISI rules and regulation that prevent our daughters or anybody willing for that matter to adorn hijab, let alone the constitution of the FRN.

“Even if there is anything like that, the constitution of FRN supersedes any other law. And if it was not contained there, then why are they harassing our daughters,’’ he said.