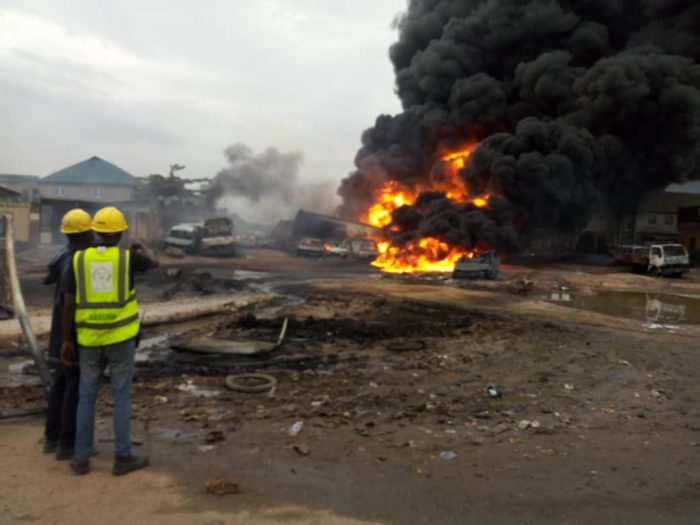 The Onijegun of Ijegun, Oba Nureini Olomitutu, said on Friday that activities of vandals and other criminals were threatening lives in the area.

He spoke when members of the Senate Ad-hoc Committee on Pipeline Vandalism visited his palace in Lagos.

The committee, led by Sen. Ibrahim Gobir, was in the Ijegun area on an investigative visit, over the July 4 pipeline explosion in which lives were lost and properties destroyed.

Olomitutu called on the government to provide more security around pipelines to end such problem.

”We are tired of disasters. We don’t want to be known for this kind of thing anymore.

“We want the government and the NNPC to provide more security here to check these criminals,” the monarch said.

Explaining the reason for their visit to the monarch, Gobir said the committee was in the area to see how the activities of vandals could be checked and pipelines made secure, to end losses.

He said the committee had also visited Rivers on Thursday, where it was also investigating cases of pipeline vandalism.

The committee chairman thanked the monarch for the reception, promising that the committee would do its best to end the problem.

Earlier, the ad-hoc committee promised to conduct a thorough investigation into the July 4 pipeline explosion.

Gobir, speaking after the committee members had gone round the affected areas, described the incident as unfortunate.

He said the senate was devastated by the incident, in which lives were lost and properties destroyed.

Gobir promised that the committee would do a thorough job to find lasting solutions.

The committee chairman condemned vandalism of pipelines by criminals and called on residents of Ijegun to be vigilant with a view to checking their activities.

”Our main purpose here is to investigate the cause of this problem and find a lasting solution to pipeline vandalism, not only in Ijegun, but across the federation.

”Our concern is to put a stop to these destructions wherever it would occur; after this visit, solution will be proffered.

”But we have to be vigilant ourselves. We have to make sure we are our brother’s keeper.

“We have to find out who is trying to vandalise pipelines and report to security agencies.

”It is very unfortunate that this kind of incident happened because of vandalization of pipelines.

“We will carry out our work thoroughly to put an end to this kind of tragedy,” he said.

Gobir expressed condolences of the senate with the people of the community and prayed for the peaceful repose of those who lost their lives.

Adeola (Lagos West), who took committee members round, decried the incessant cases of pipeline explosion in Ijegun and neighbouring areas.

He said that many people in the area had lost their lives and valuables to pipeline explosion caused by the activities of vandals.

Adeola described the latest incident as devastating, saying he moved a motion on the floor of the senate on a compelling need for action to end the menace.

”This is the second time we are experiencing this kind of tragedy in this area. The first one was around Jakande and people died too.

”As the senator representing Alimosho, under which is Ijegun, I moved a motion on the floor of the senate for urgent action to put an end to the problem.

”The senate immediately mandated this committee to probe the incident and that is why they are here to have first-hand information about the problem.

”I am appealing to the committee to do its best to ensure we have solutions to the problem.

”I am also appealing to the government to do their best for the development of Ijegun.” he said.

Adeola commended the state government for its efforts at giving succour to the people who were affected one way or the other in the incident.

The senator thanked members of the committee for the visit and urged Ijegun residents to be vigilant and report suspicious activities around pipelines to security agencies.

He promised to be with the people at all times and respond to the needs of his constituency.