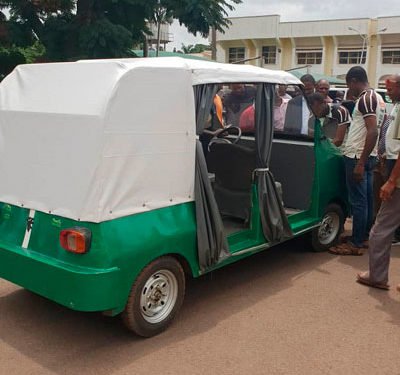 The University of Nigeria Nsukka (UNN) has made history by becoming the first institution to produce an electric car in Nigeria.

The car named Lion Ozumba 551 after the immediate past vice chancellor, Prof. Benjamin Ozumba was produced by the Faculty of Engineering of the university.

Explaining the techniques of the car, the coordinator of UNN mechatronic group who led the team that produced the car, Mr Ozoemena Ani, said the vehicle was produced with 80 percent local content materials.

Ani said the car could be charged in any electric socket and when fully charged would go a distance of 30 kilometres.

“We used 80 percent of local material content in building this electric car.

“It cost us N800,000 to produce the car. When the car is fully charged it will go up to thirty kilometers before it can be recharged,” he said at the unveiling ceremony of the car.

The Director-General of National Automotive Design and Development Council (NADDC), Mr Jelani Aliyu who was represented at the unveiling ceremony commended the University of Nigeria Nsukka for being the first to produce electric car in the country.

He urged other universities in the country to emulate UNN desire in giving serious attention to issues concerning innovations and technology in order to move the country to the next level.

“NADDC on February 6, 2019 invited UNN, University of Lagos, Usman Danfodo University and Matrological Institute and urged them to prepare a paper design on how to produce electric car in the country.

“The council is happy that UNN is the first to prepare a paper design and produced an electrical car that has been unveiled and test-run today in the university.

“We urge other universities and higher institutions in the country to emulate innovation and technology spirit of UNN,” he said.

The DG who was represented by Mr David Oyetunji, the Director Finance and Account in NDDC said, improving on automobile industry in the country would help create more employment as well as reduced huge amount of money used in importing cars into the country.

“Improvement in the automobile industry will create more employment as well as reduce huge amount of money used in importing cars into the country.

”NDDC commends UNN who recently produced the first gasification plant that used organic waste to generate electricity and today the same university is unveiling first electric build car in the country,” he said.

In a remark, Prof Charles Igwe, the Vice-Chancellor of UNN, who was filled with joy, said his administration would continue to give innovation and technology the highest attention in order to move the university to the next level.

Igwe expressed appreciation to the immediate past VC of UNN, Prof Benjamin Ozumba whom he said laid the foundation of innovation, technology as well as through his hard work made UNN the number one university in the country.

“I feel happy that I inherited a strong institution from Ozumba and I promised I will consolidate on his numerous achievements.

“I commend the engineering faculty for making the university proud as well as naming the car after Ozumba who ignited the fire of innovation and technology in the university.

“I also commend NDDC for its encouragement as well as giving UNN a chance to show its potential,” he said.

Speaking, Ozumba said he was overwhelmed when he received an invitation to come and witness the unveiling of the electric car which was initiated by his administration,

“When I came on board I said we need innovation and technology to be at par with China, US, Sweden and other developed countries of the world.

“That was why I provided the resources and encouragement for innovations and technology because I believe that is one of the ways we can improve our country’s economy.