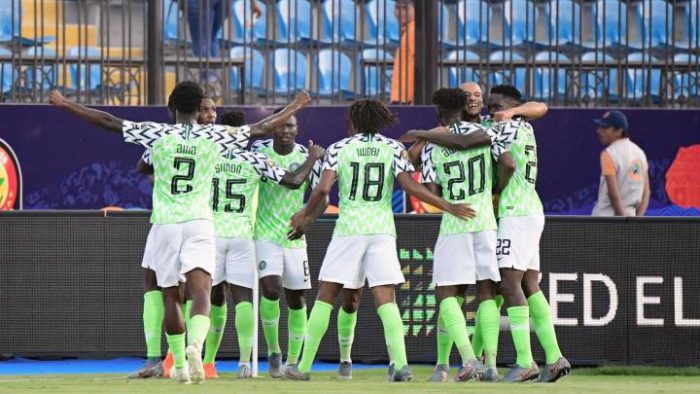 Super Eagles of Nigeria will face Desert Warriors of Algeria on Sunday, July 14 in the on-going African Cup of Nations (AFCON) 2019 in Egypt.

Andinam, who gave the advice in an interview on Sunday in Calabar said the Algerians were very organised and would not fail to punish them if they made such mistakes.

He said that the team had made a couple of defensive mistakes in previous matches of the competition even though they came out victorious in those matches except the match against Madagascar.

He, however, urged the team to redouble efforts and to make it to the finals, noting that the Super Eagles were a very talented side and could beat any team in the continent.

He called on Gernot Rohr, Head Coach of the team, to keep faith with the winning team as it appeared that the boys understood themselves.

“In situations like these, you don’t change a winning team; Gernot Rohr has all the talents in his team, he should know how to utilise them when it matters most.

“I think our goalkeeping department has some questions to answer, although, football is a team sport.

“The team is as strong as its weakest link; if that department is sorted out, I think we are home and dry,’’ the Chairman said.

On the recent introduction of the Video Assistant Referee (VAR) in the competitions, Andinam said the innovation was the best thing to ever happen to football.

He said that it had added pep to officiating and checked the biases of referees.

According to him, even though the technology was mostly used during contentious situations in the game, it has curtailed a lot of claims and counterclaims in the game.

“Initially, we used to see a lot of pranks from strikers just to attract questionable calls from the referee that would end up being contentious.

“But now, the strikers and defenders are a bit more careful because they know VAR is there.

“It is just that in this part of the globe, we are not actually used to it.

“I think it should be enforced in all the football federations by the International Federation of Association Football (FIFA), the world football governing body.

“I think it should have been introduced earlier in the African Cup of Nations (AFCON) 2019 so players can get acquainted and be less suspicious.

“This is because referees are human and may not see some infringements, but VAR catches them with precision and has an option of playback,’’ Andinam said.

FIFA officially approved VAR for use on March 16, 2018, in Bogota, Columbia and the 2018 World Cup in Russia was the first competition where the technology was used in full.