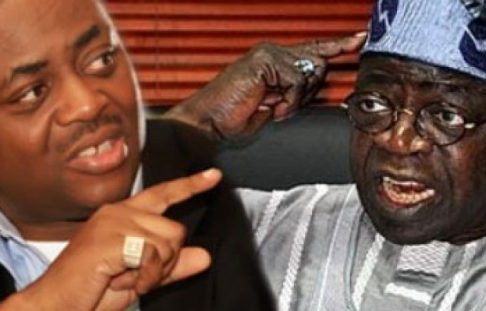 Femi Fani-Kayode, former Minister of Aviation has attacked the National leader of the All Progressives Congress, APC, Asiwaju Bola Tinubu over comment he made when he visited Pa Reuben Fasoranti over the murder of his daughter, Funke Olakunrin.

Tinubu, who visited Fasoranti on Sunday sympathised with the bereaved but lamented that some people were already playing politics with the issue by linking it to herdsmen.

In a sharp reaction, Fani-Kayode, in series of tweets said he listened to Tinubu’s slurred speech and utter nonsense at Pa Fasoranti’s home, saying he was inconsiderate and insensitive.

“He was not there to mourn or commiserate with Pa Fasoranti, he was there to mock him, to pour salt in his wounds, to play politics and to speak for his Fulani masters.

“What have the kidnapper of Evans or the Igbo got to do with the targeting and assassination of Olakunrin?And why the obscene determination and desperate hurry to absolve the Fulani of this hideous crime? He may not believe that they did it but why would he rule it out completely?

“Does he know something that we do not know? Is he an expert when it comes to assassination, homicide and murder matters? Does he know who the killers are? Why the rush to tell us who it wasn’t? Can’t he at least wait for the police to conclude their so-called investigation?” He asked.

According to Fani-Kayode, even for a confirmed quisling and desperate serf, this time Tinubu has gone too far, saying that “Funke has not even been buried yet and he is already pissing all over her bullet-riddled body. Tinubu has sold his soul to the devil and his conscience to the north.

“He has become a slave to his ambition and a plague to his people. He is a shameless soul and wicked old man who is ready to sacrifice anyone and anything to become President. I make this pronouncement today: as long as Jesus sits on the throne he will fail woefully.”