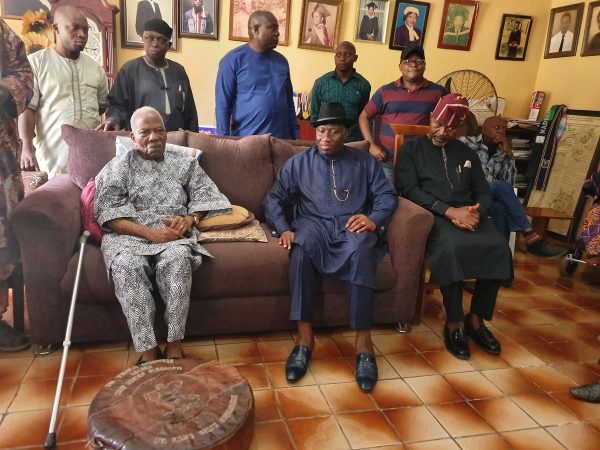 Former President Goodluck Jonathan has tweeted his visit to grieving Pa Reuben Fasoranti, father of Funke Olakunrin, who was killed by bandits on Friday.

“I was at the residence of Pa Reuben Fasoranti at Akure, Ondo State, to sympathise with his family on the death of his daughter, Mrs. Funke Olakunrin. May God heal all grieving hearts and grant the soul of the departed eternal rest”, the former leader said on Tuesday.

He also a posted photograph where he sat grim-faced, sharing in the melancholy of Pa Fasoranti and another photograph showing him writing a tribute for Olakunirn in the condolence register.

Last Friday, Jonathan had also sent words of condolence to the old man, whose faction of Afenifere supported his failed re-election in 2015.

“My heart goes out to Chief Reuben Fasoranti and his entire family over the untimely death of his daughter, Mrs. Funke Olakunrin, at the hands of suspected herdsmen.

“No one deserves to hear such news, not the least being Pa Fasoranti, a man that has given so much to Nigeria and asked so little.

“I am encouraged by the message from the Governor of Ondo state and his assurances that those behind this heinous and callous crime will be brought to book”.

“Baba, may God comfort you and your family and grant you the fortitude to bear the loss, even as we pray that the Almighty returns peace to Nigeria. My family and I offer you our deepest solidarity now and always. We also extend our arm in love to Afenifere”.

A part of the Friday tweet had also kicked a storm, as he was criticised for joining the mob of accusers pinning the killing on herdsmen, instead of gunmen, as police said the ethnic identity of the killers was unknown because they were masked.