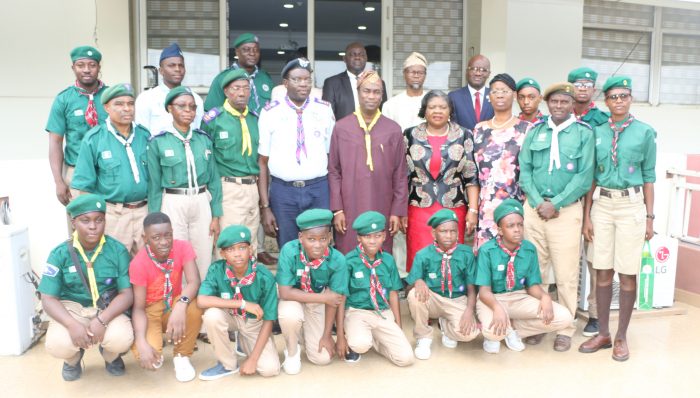 Hamzat with members of the Boys Scout

The Lagos State Deputy Governor, Dr Obafemi Hamzat, on Wednesday urged students of primary and secondary schools to join uniformed clubs in their schools to channel their youthful strength towards impacting the society positively.

Hamzat made call while receiving the members of Lagos State Council of the Scout Association of Nigeria who visited him in his office in Alausa, Ikeja.
He said that most youths who indulged in crime and other vices did so because they were not challenged early in life to engage in positive activities that would enable them to impact their society positively.
“Uniformed clubs have been veritable tools through which vibrant children were being utilised positively over the years  for the good of their future and humanity.
“I called on Nigerian youths to always seek means of making the society better by shunning all forms of gangsterism and crimes,” Hamzat said.
Earlier, the Commissioner for the Lagos State Scout Council, Mr Oyeyemi Adebesin, who led the team, appealed to parents to give better attention to the upbringing of their children and wards.
Adebesin said that some children got involved in vices due to parental negligence.
“It was the responsibility of parents to monitor and know the kind of friends their children keep to shield them from negative peer pressure.
“And the truth is that if we do not play our roles as parents now, the repercussions will wait for us in the future.
“As a voluntary organisation, we will continue to do our best to educate these children and youths by inculcating the right virtues and discipline needed to make them responsible adults in the country,” he said.
Adebesin also announced that 230 Nigerian students would be participating in the 24th World Jamboree in West Virginia, U.S., beginning on July 22.
He noted that 30 out of the 230 students going for the World Jamboree were from Lagos public schools.
“The Jamboree will empower and develop our youths and we solicit the support of the state government,” he said.
Tags:   Dr. Obafemi Hamzat