Tacha, Mike in near showdown as eviction looms 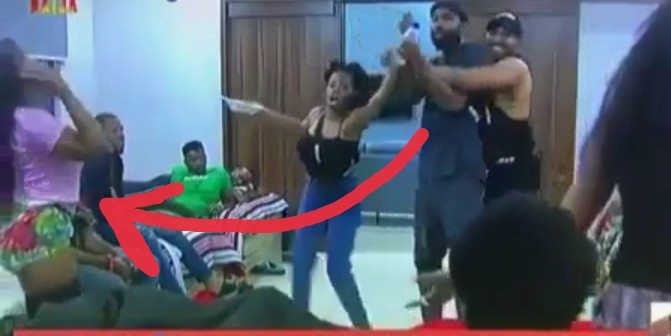 Mike right being prevented from a possible showdown with Tacha left

Tacha and Mike almost exchanged blows Wednesday at the Big Brother Naija House but for other housemates who separated them.

The whole thing started when Tacha was explaining how she made it online making videos.

Mike interjected and called her a liar, drawing attention to the contradiction in her story.

Tacha tried to defend herself before matters got out of hand: a serious quarrel between them. But for those around, may be something else would have happened.

The two of them are listed for possible eviction along with Seyi, Frodd and Tuoyo.

Tacha was also involved in a one-sided brush with Frodd on Wednesday after a frog jump exercise led by Tuoyo.

In the exercise, the ladies were treated to some fun when strapped to the men’s back like babies as they raced from one end of the Arena to another.

The sweet rhythm seemed to be fuel to the men’s energy as they sped to the other side like a jet this morning.

After the workout session, they all went back into the room preparing for the day’s Tasks. Some of them had to use the bathroom.

Frodd was ready to use the bathroom but realized that Tacha was already there. As he made to go in, Tacha sent him back with peppery words.[videopress qeJtcC5l]

Tacha wouldn’t allow any of the guys have their bath because she was bathing. Eh, who dares to mess with the Queen! While some of the guys in the dressing room kept their cool about Tacha’s missile words.

However, Frodd didn’t say a word (remember the saying, silence is the best answer for a fool?), Tacha became enraged hurling verbal missiles at him. She called him all sorts of names like “stupid”, “idiot” “multi-coloured human being”. However peppery these words were, Frodd kept his cool.