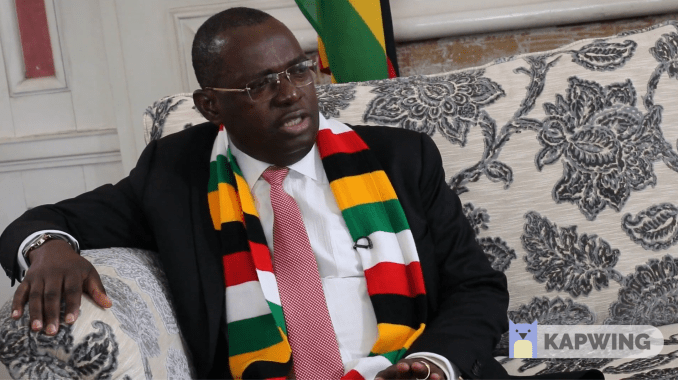 The Zimbabwean Government, on Wednesday, summoned the British envoy over an assault on Foreign Minister, Sibusiso Busi Moyo, and his delegation in London, state-run media reported.

The Herald newspaper added that the government had also called for the attackers, who appeared to be predominantly Zimbabwean.

It added that the attackers be prosecuted after they splashed Moyo with bottled water while hurling insults at him at the Global Conference for Media Freedom.

Moyo was on a four-day visit to the United Kingdom as part of the Zimbabwean government’s re-engagement thrust, under which he sought to strengthen bilateral relations between the two countries and lure investors.

Acting Secretary for Foreign Affairs and International Trade, Pavelyn Musaka, said the government was concerned about the incident.

A source told the paper that inexplicable laxity by security services allowed the assailants to pounce, despite top-notch security having been provided prior to the incident.

“Our government, through the Ministry of Foreign Affairs, has summoned the Charge d’Affaires of the United Kingdom, Great Britain and Northern Ireland.

“Mr Giles Enticknap will register our protest against the assault on Minister Moyo and his Zimbabwe delegation to the Global Conference for Media Freedom co-ordinated by the government of the United Kingdom,’’ Musaka said.

Musaka said the protesters’ actions were a violation of laws of both the UK and international laws regarding the protection of persons of Moyo’s stature.

“The ministry, therefore, calls for the government of UK to take all measures necessary to bring the perpetrators of the violence against the minister to book for their actions,’’ she said.

Following the attack, Moyo twitted to his followers, saying that he was unharmed.