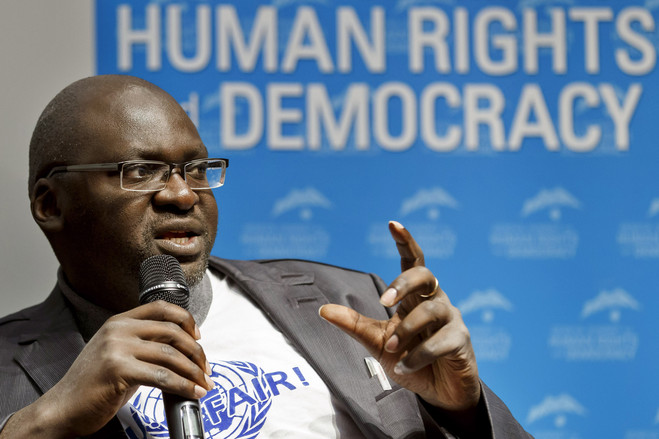 A United States District Court has ordered the service of a $10 million defamation law suit on two journalists, Drew Hinshaw and Joe Parkinson, through the publishers of the Wall Street Journal (WSJ) their employer.

The legal action was instituted by international human rights lawyer, Emmanuel Ogebe in response to an alleged defamatory story published by them over his sponsorship of Chibok girls to the US to school.
The court also granted the New York based newspaper extension of time to file their defense to the 40-page libel lawsuit.
The Wall Street Journal, in its report of April 13, 2018, titled: “The American Ordeal of the Boko Haram Schoolgirls,” reported the story of how having escaped to the U.S. after the 2014 mass kidnapping, a group of Nigerian students found themselves trapped all over again, using the experience of teenager Kauna Bitrus.
According to the WSJ, “When Kauna landed, months later, in the pine-shaded town of Grundy, Va., she was among the lucky few Chibok students awarded full scholarships and sanctuary at Christian academies in rural America. But here too, Ms. Bitrus and six of her classmates found themselves hostage to forces they couldn’t control. Thrust into the media spotlight by a prominent Nigerian human-rights lawyer, they say they were forced to relive their trauma to raise money and further political agendas in Washington.
In the lawsuit served on Hinshaw and Parkinson, the Plaintiff (Ogebe) said by such publication, The Wall Street Journal and Hinshaw did cause harm to his reputation and that hinshaw and The Wall Street Journal’s publication of these false statements was negligent and malicious at best but that it was all too apparent that it was reckless and intentional falsehood as he was never confronted with the key elements.
“More so WSJ essentially published a sole-source claim by one out of 12 girls but masqueraded as though it were all of the girls. Plaintiff asserts that Ms Bitrus never gave an interview of her story to any media in the US during her 2 years in the program at his behest. Plaintiff asserts further that Ms. Bitrus was never in any Nigerian church with the Plaintiff and never time traveled with him in the Mid Atlantic.”

The Plaintiff also said at minimum, Hinshaw and The Wall Street Journal should have had serious doubts as to the truth of these statements by the Nigerian government who had an axe to grind, and a high degree of awareness that they were probably false, and therefore were required to investigate their veracity before publishing them and afford Plaintiff a copy for his response, adding that Hinshaw and The Wall Street Journal’s failure to do so amounted to actual malice or at best grievous recklessness.

According to the Plaintiff, ​Hinshaw and The Wall Street Journal purposefully avoided the truth, and premeditatedly avoided public facts such as that the girls who were not lured away from the Plaintiff by Doug Wead’s and the embassy’s ruse remained in school and successfully graduated with diplomas and were all in college at the time of publication and that the defendants betrayed fundamental reporting practices intentionally in order to promote lies.

“​Hinshaw and The Wall Street Journal’s actions were malicious, willful, and wanton, and evidence a conscious disregard for Mr. Ogebe’s rights. Defendants’ publication have hurt Plaintiff Ogebe and his human rights work and his ability to help countless victims who rely on his support. The ripple effect in terms of lives lost is colossal. Accordingly, punitive damages are appropriate.

“Hinshaw and The Wall Street Journal’s statements concerning Plaintiff Ogebeare defamatory per se because they attribute to Plaintiff unfitness to perform the duties of his profession, impute criminal conduct and foreseeably would hurt Mr. Ogebe in his profession. Plaintiff is therefore entitled to presumed damages.

The Plaintiff added that wherefore, as a direct and proximate result of these false statements by Hinshaw and The Wall Street Journal, he had suffered damages, including, inter alia, injury to his reputation, embarrassment, humiliation, and emotional distress, in an amount to be determined at trial and that he sought judgment against the defendants.

The Plaintiff further said that on April 13, 2018, The Wall Street Journal published “The American Ordeal of the Boko Haram Schoolgirls,” saying that as a result of the article, his reputation was irreparably damaged worldwide and that he had also suffered significant embarrassment, humiliation, mental suffering, and emotional distress as a result of the defamatory article by Hinshaw and The Wall Street Journal.

However, the Plaintiff requested that the Court entered an award in his favour, and against Defendants by ​awarding​him compensatory damages of​ not less​than $10,000,000.00; awarding him punitive damages of not less than $1,000,000.00 and awarding him all expenses and costs, including attorneys’ fees.

The Plaintiff further requested that the court entered in his favour against the defendants by awarding an apology to be published in various global media of his choosing; awarding an injunction restraining defendants from further defamatory publications against him and awarding such other and further relief as the Court deemed appropriate.