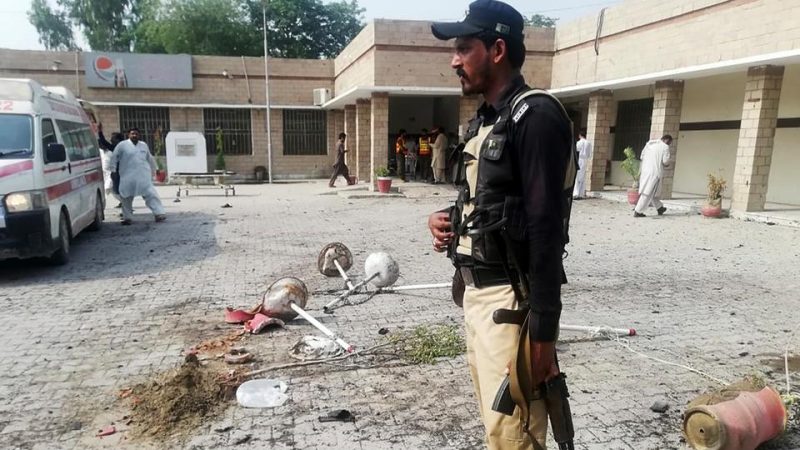 The scene at the Pakistani hospital on Sunday. Photo: TRT World

A female suicide bomber, wearing a burka, blew herself up at a hospital this morning, killing at least seven persons and injuring another 30.

The incident at a Pakistani hospital in Kotlan Saidan village on the outskirts of the northwestern city of Dera Ismail Khan was claimed by the ‘Pakistani Taliban’ – Tehrik-e-Taliban Pakistan.

He said the bomber then struck at the entrance to the hospital, killing another four police and three civilians who were visiting their relatives.

The female attacker set off 15lbs (7kgs) of explosives packed with nails and ball-bearings, according to Inayat Ullah, a local forensics expert.

Eight police are among the wounded, and many of those with injuries are in critical condition.

‘When their bodies were taken to the main hospital, a suicide bomber, believed to be a female, wearing a burqa, triggered an explosive-laden jacket and caused huge losses,’ said Waqar Ahmad, a local police officer.

The explosion damaged the emergency room and forced it to shut down so those injured from the blast have been taken to a military hospital, according to a hospital official

Pakistan’s military has carried out several major operations in recent years against the Pakistani Taliban and other militants in areas along the porous border with Afghanistan.

The violence has declined, but the militants still make their presence known through occasional attacks, mainly targeting security forces and religious minorities.

Muhammed Khurasani, a spokesman for the TTP, claimed responsibility for the attack, which he said was carried out in revenge for the killing of two Taliban commanders by counter terrorism police around a month ago. However he denied the bomber was female.

Police have now arrested 16 suspects in the attack, all of whom belong to banned organisations.