Etebo to mentor 200 young footballers at summer camp in Lagos 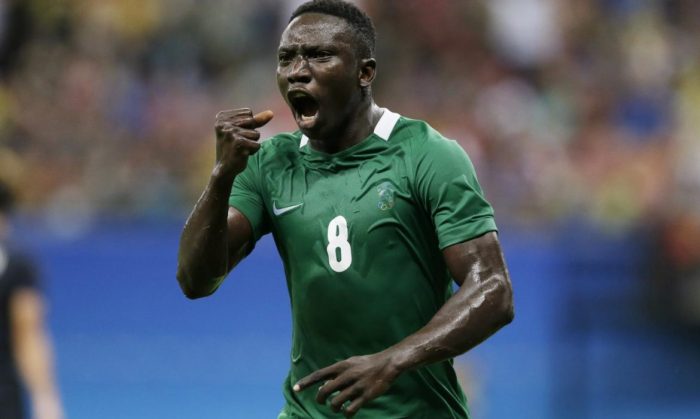 The midfielder is expected to mentor and take the young footballers in tutorials at the summer camp which began on Monday at the Legacy Pitch, National Stadium, Surulere.

The Project Manager, Spring Academy, Dapo Emmanuel, said in Lagos that the essence of having Etebo was to motivate the young footballers and also for mentorship purpose.

“The whole idea is to get the young boys and girls involved, putting them in the right frame of mind and to have someone they can aspire to look up to.

“This is borne from the fact that quite a number of our young ones don’t have mentors among our own national players, they only choose foreign players.

“Our young footballers cannot be idolising foreign footballers over our own football stars, we need to have a legacy we are protecting and cherish.

“For this reason, we need to look out for someone among the Super Eagles with good character, strong influence and influential, that is how Etebo came to the frame,” he said.

Emmanuel said that Etebo among other notable football stars would be on ground to take the young ones on the rudiments of football.

“The fact about Etebo is that he played exceptionally well during the just-concluded African Cup of Nations (AFCON), he is one of the outstanding players.

“Etebo played his hearts out during the AFCON tournament, so he will be around in the company of other footballers such as Daniel Akpeyi, National Beach Soccer captain, Bisiriyu, NPFL top scorer, Sikiru Alimi.

“During this summer camp, there will also be scouts around to discover raw talents, we have a couple of them around now, so what is left is for the young footballers is to impress.

“Besides those that will be around, a video clip of the summer camp will be sent to other academies abroad, so this will give our footballers a great mileage,” he said.

The Spring Academy Summer Camp will end on Friday.