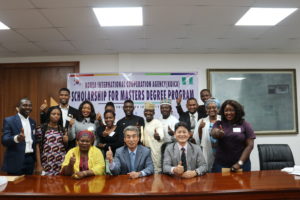 The Republic of Korea has awarded full scholarships for Master’s Degree Program to 13 Nigerian government officials to study in leading Korean Universities.

The 13 students were drawn from different agencies of the government and a Pre-departure orientation program was organised to prepare and advise students on what to expect while studying in Korea.

Speaking at the event, Ambassador of Republic of Korea, Mr Lee In-Tae while addressing the students said the scholarship was awarded through the country’s grant aid and technical cooperation agency (Korea International Cooperation Agency- KOICA).

In-Tae said that the KOICA scholarship covered a round-trip air ticket, admission and tuition fees, accommodation, health insurance and meals during the participants’ stay in the Republic of Korea.

He said that the Korean government had been supporting the Nigerian government since it established a diplomatic relationship in 1980.

He said that the objective of the scholarship was to assist Nigerians to be abreast with global best practice especially in terms of technology that Korea has achieved.

He reiterated the importance of “Can-Do Spirit’’ to junior Nigerian Government officials who would leave the country for the scholarship course in Korea and encouraged them to replicate what they learned in Nigeria on their return.

“ Korea is one of the few countries which successfully transformed from aid recipient to donor in the world.

“The cornerstone which can change Nigeria is not only a physical or material asset but the Can-Do Spirit and mind-set of government officials.

“You should make Nigeria one of the most peaceful and prosperous and innovative countries in Africa and in the world when you return,” he said.

The Country Director, Woochan Chang said that the scholarship program was a global initiative to support people to study.

Change said that from 1997 to 2018 over 50 Nigerian Government officials had been supported to undertake Master’s Degree programs in Korea.

He said that this year, 13 government officials from various Ministries, Departments and Agencies across nation were successful on the program.

He said that through this program, students were given the opportunity to learn from Korea’s experience in poverty reduction.

He said it was to also help them to gain greater understanding of critical success factors of Korea’s development that would contribute towards the future social, political and economic ties between Korea and Nigeria.

One of the scholarship beneficiaries YashimKaturak Rebecca said that 2019 made it her third year applying for the KOICA Master’s Degree Program.

“During the years 2015, 2017 and 2019, I never applied for master’s program in any other countries because it was either Korea or no other country.

“My persistence was born out of my love for the Korean people, her history, and high education standard,’’
Yashim said that the can-do spirit of Koreans which fostered the rapid development of the country from a recipient of aid in the 1960s to the 11th strongest economy in the world was a lesson to learn.

Mr Kalu Nduka, another recipient of the scholarship commended the Korean government for the privilege and promised to utilise the knowledge provided.

The Republic of Korea hoped that the participants would gain professional and first-hand knowledge to enable them play key roles in Nigeria’s development after their study.