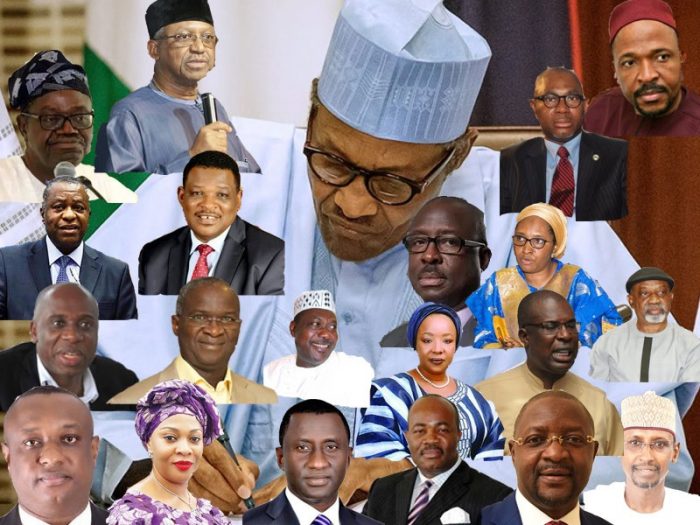 Buhari and his ministers. Photo: Aprecon

Nigeria’s President, Muhammadu Buhari recently sent the list of 43 ministerial nominees to the Senate for approval. Some of the nominees have already been screened. But how much do you know of some of the new entrants into the cabinet?

Here are their pedigrees: 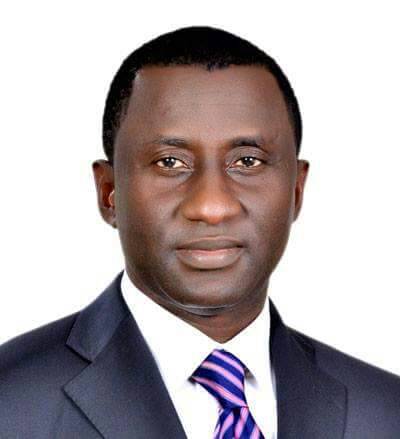 He was born on 22 December 1969 to Chief Wilson and Ezinne Pauline Ogah of Onuaku Uturu, Isuikwuato Local Government Area of Abia State. He is a Nigerian oil magnate, entrepreneur, investor and philanthropist. Ogah is the President of Master Energy Group, a conglomerate with over 15 subsidiaries and interests across a variety of industries. Ogah holds the Nigerian national honour, the Officer of the Order of the Niger (OON)

Ogah attended Ishiagu High School, after which he worked at West African Examination Council (WAEC) from 1986–89, before he proceeded to the Institute of Management and Technology (IMT), Enugu State where he obtained Upper Credit at Ordinary National Diploma (OND) in 1992 and Distinction at the Higher National Diploma (HND) Level in 1995 in Accounting. He also attended University of Nigeria, Nsukka (UNN) where he obtained a Postgraduate Diploma in 2005. He also has a Bachelor of Science degree (Banking and Finance) from Ogun State University and a Masters in Business Administration (MBA) from University of Lagos. Ogah obtained his ACA in 2007. He is a Fellow, Institute of Chartered Accountants of Nigeria (ICAN); Fellow, Institute of Brand Management of Nigeria; Fellow, Nigerian Institute of Shipping; Fellow, Employment & Career and member, Chartered Institute of Bankers.

He was born 9 December 1962. He is a Nigerian lawyer and politician who is a former Senator of the Federal Republic of Nigeria and the Senate’s Minority Leader. He was also Governor of Akwa Ibom State of Nigeria from May 29, 2007 to May 29, 2015.

Akpabio was educated at Methodist Primary School, Ukana, Essien Udim LGA, Akwa Ibom State; the Federal Government College, Port Harcourt, Rivers State; and the University of Calabar, Cross River State, where he obtained a Degree in Law. While at the Federal Government College, Port Harcourt, he was appointed the Senior Prefect. In the University of Calabar, Akpabio was elected as the speaker of the parliamentary year.

Sharon Ikeazor was born into the family of Chief Chimezie Ikeazor, SAN, of Obosi, Anambra State, the founder of the Legal Aid for the Poor Scheme in Nigeria. She graduated with an LLB Hons in 1984 and was called to the Nigerian Bar in 1985.

She has 27 years’ post-graduation experience as a Solicitor and Advocate and a vast knowledge and experience in the field of business development for foreign multinational companies, project management, banking administration, national and international government liaison.

She was an Executive Secretary in Pension Transitional Arrangement Directorate (PTAD).

Sylva was born in Brass, Bayelsa (formerly Rivers State, of which Bayelsa State was split off from in 1996), and was educated there and in Lagos, the former capital of Nigeria. He was a member of the Rivers State House of Assembly in the 1990s.

As a candidate of the People’s Democratic Party, PDP, Sylva won the Bayelsan gubernatorial election on May 29, 2007 and succeeded Goodluck Jonathan who went on to the position of Vice President.

George Akume obtained a bachelor’s degree in Sociology and a master’s degree in Labour Relations from the University of Ibadan. He became a career civil servant who rose to the apex of the professional career ladder as a permanent secretary.

Agba is the first son of HRH Uti J.D. Agba, the paramount ruler of Obudu Area Council reputed to be the longest serving traditional ruler in Cross River State. Agba’s father has been on the throne for over 50 years and he is a three-time chairman of the State traditional council. He contested during the last guber election in Cross River in 2015, but lost.

Keyamo was born on January 21, 1970 at Ughelli, a town in Delta State, southern Nigeria but his father hails from Effurun, a city in Delta. Keyamo had his primary education at Model Primary School and secondary education at Government College, Ughelli, where he obtained the West African School Certificate in 1986. He later proceeded to Ambrose Alli University at Ekpoma, in Edo State where he received a Bachelor of Law degree in 1992 and was called to the Nigerian Bar on December 1993.

Keyamo is a Senior Advocate of Nigeria SAN, social crusader, critic, columnist and human rights activist. He was named by the Legal Practitioners’ Privileges Committee (LPPC), Nigeria in July 2017 as one of the outstanding Nigerian lawyers to be awarded the rank of SAN. Keyamo was also awarded the Global Human Rights Award by the United States Global Leadership Council in Washington for his efforts over the years in respect of protection and promotion of human rights and the crusade for accountable governments in Nigeria.

Adebayo was born on February 4, 1958. He is a Nigerian politician and traditional aristocrat. He served as the first Executive Governor of Ekiti State from May 29, 1999 to May 29, 2003 and represented the Alliance for Democracy (AD). Adebayo has been associated with APC, and he is currently a top chieftain of the All Progressives Congress. He has extensive experience in a wide range of disputes & legal and advisory work. His more notable achievements have been in the areas of project finance, oil and gas, contract procurement and business facilitation. He is a member of Nigerian Bar Association (NBA) and the International Bar Association (IBA). Niyi is a keen sportsman and plays tennis, squash and football. He attended University of Lagos where he studied Law and obtained (LL.B Hons).

Ibrahim Pantami was born on 20 October 1972 in Gombe State, Nigeria. He started his education by attending traditional School for memorizing the Qur’an, called “Tsangaya School.” He spent more than four years in the school. He later joined primary school in Pantami. He attended Government Science Secondary School in Gombe. After his secondary education, he spent additional two years seeking for more religious knowledge before moving to university. He studied Computer Science at Abubakar Tafawa Balewa University in Bauchi, Nigeria, gaining a BTech in 2003 Session and an MSc in 2008, before obtaining a PhD from Robert Gordon University, Aberdeen, Scotland. He spent his life pursuing both formal and informal education, by switching from one form to another.

He is also trained on Digital transformation in Harvard University, USA, then Management Strategy in both, Massachusetts Institute of Technology, and Institute of Management Development in Loussaune, Switzerland. He was also in Cambridge University for Management Programme, among others.