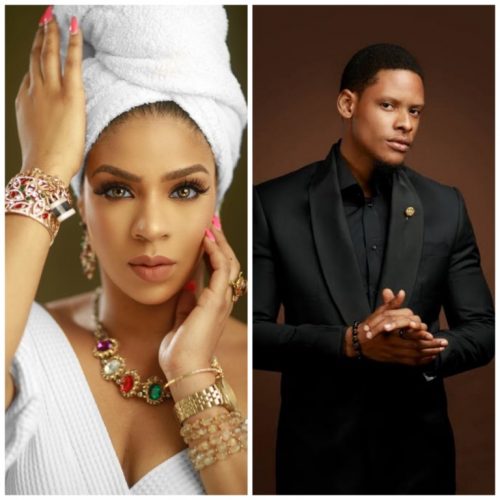 The two new housemates Venita Akpofure and Elozonam Ogbolu introduced on Tuesday have stirred excitement among fans of the show.

At exactly 7 pm, the Big Brother Naija doors were open to the newest members of the ‘pepper dem’ gang following a prior announcement by Ebuka Obi-Uchendu.

The new female housemate, Venita is an actress, model and video vixen who rose to fame by playing ‘Mimi’ in the widely acclaimed ‘AYs crib’ produced by comedian, Ayo Makun.

She played AY’s quirky but uptight love interest in the sit-com and has also appeared in several other movies and music videos.

The male housemate, Elozonam is a graduate of Kwame Nkrumah University of Science and Technology (KNUST) in Ghana. He is an actor, voice artist, director and also a producer.

The resident 14 housemates, who thought they were expecting visitors, were visibly shocked at the addition of two more housemates.

While Omashola and Frodd tried to show Venita around, the others were more cautious observed the housemates from a distance.

Fans, however, were excited for the new additions, as they had followed their careers before the show.

The new housemates raised expectations on what some fans already describe as ‘a boring fourth season’, hoping that Venita and Elozonam will add more live to the show.

@Hawtpursuit tweeted, “These new hms are actually doing the dares. Elozonam is actually bringing pepper..the old ones are just dry. Everything they wont do #bbnaija”

@Jessechikwe7 said, “Venita and Elozonam are really giving us the much entertainment we have been looking for. #BBNaija”

@Megxooffical said, “Venita looks like she came with Atarodo and Shombo! Elozonam looks like a grown up Korede Bello that Diane and Esther will want for lunch and Dinner.”

@Unbeatablediva said, “Really love the way venita introduced herself, yes she’s a mother of 2. She didn’t hide anything. Am beginning to like her already.”

@officialdara said, “Aunty venita is doing as if she has not been watching bbn at home.”

@Iamonismate said, “The way other female Housemates are looking at Venita Akpofure and feeling intimidated already.”

With seven housemates already evicted, Mike, Tacha, Omashola and Jeff are currently up for possible eviction on Sunday night