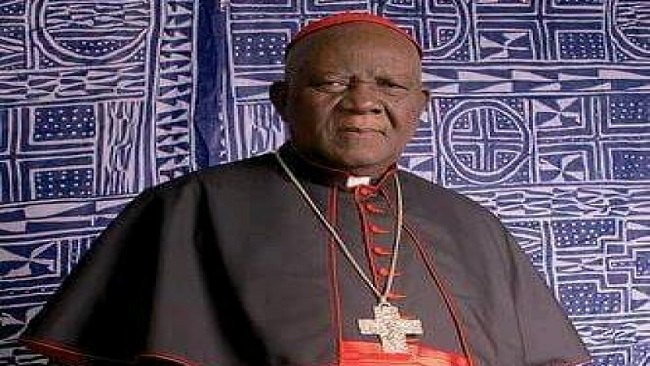 Cardinal Christian Tumi, the emeritus Archbishop of Douala, has called for a federal system of government to end the four-year Cameroon’s Anglophone crisis and keep the country unified.

He said the re-introduction of a federal form of government can keep the country united.

“At reunification, I was 32 years old. I opted for federalism, and it’s in my blood,” Tumi told the Vatican newspaper Crux.

About 80 percent of Cameroon is French-speaking. However, the Northwest and Southwest regions of Cameroon are majority English-speaking, a legacy of the colonial history of the country: Cameroon was originally German, but after World War I the defeated country transferred it to the Allies, and it was divided between France and Britain.

In October 2016, strikes by lawyers and teachers over perceived attempts by the Francophone administration to assimilate the legal and educational systems practiced in the two English-speaking regions turned violent, and morphed into rising demands by Anglophone Cameroonians for independence.

The government has been accused of razing entire villages and extrajudicial killings in their hunt for separatists, who are calling on the English-speaking areas to form a new country, called ‘Ambazonia.’

The results showed an overwhelming desire by English-speaking Cameroonians to reunite with the French-speaking part of Cameroon.

The “marriage” was guaranteed by a Federal Constitution that was meant to preserve and protect the minority Anglophones and their colonial heritage.

But in 1972 then-President Ahmadou Ahidjo organised a referendum that dissolved the federation in favour of a united republic, thereby removing the protections Anglophones enjoyed.

Ever since, relations between Anglophones and the Francophone-dominated government have been tense. The 2016 demonstrations broke out after there were demands to use French in the common law courts and English-modeled schools used in the Anglophone regions.

The ensuing fighting between the separatists and government forces has led to the deaths of at least 2,000 people, and the displacement of a further 500,000.

Tumi said a return to a federal system will be the foundation for a more sustainable peace and stability in Cameroon.

“We are a people called to live with all our differences. In federalism, these differences are respected,” he told Crux.

“I don’t have the number of states I want,” Tumi said, alluding to several different federal proposals being presented by different parties.

Tumi is working with other religious leaders from other Christian denominations and the Muslim world to organize what he has called an “Anglophone General Conference.”

“The conference isn’t an end in itself,” the cardinal said. “What we want is to inform Cameroonians on what is happening in the English-speaking regions of the country.”

Tumi said many people, including President Paul Biya, “have no clue” about what is happening in the conflict zone.

“And since Anglophones are complaining, we want to give them a voice through a broad-based consultation so that they can tell us what they want and what they are proposing as a solution,” he said.

He added the conference will come up with a questionnaire that will enable Anglophones clearly to identify the problems they face and propose a solution.

“For instance, we will ask them: Between federalism and the unitary state, what form of government, in your opinion, could likely help us come out of this crisis?” Tumi said.

The cardinal said the organizers will then try to meet with Biya to transmit the resolutions of the conference, and to implore the president to organise a national dialogue on the Anglophone crisis.

Although a date has not yet been fixed, organizers say it will likely take place in October.

However, in a rare act of unity, both the government and the separatists have expressed skepticism about the proposed conference.

“The government of the Republic of Cameroon has proven over and over that it cannot be trusted. The only negotiation we can tolerate with that government is to lay down the terms of our separation,” said separatist leader, Sisseku Ayuk Tabe.

But the cardinal said he can’t understand why people want to discredit a conference, “whose sole purpose is to find a solution to a crisis that is killing many people.”

“Our sole objective is that peace should return without which we would not be able to do our missionary work,” he said.