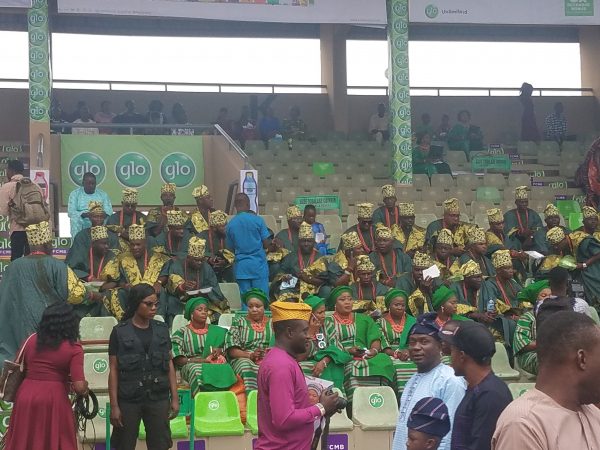 This year’s festival is gradually taking shape with the arrival of different age groups who have come to pay homage to the paramount ruler of the Ijebu land, the Awujale of Ijebu, Oba Sikiru Adetona.

The high-profile event will be incomplete without the elaborate display of horse rides by different native households and others glitz associated with the festival.

See photos of some of the groups present below: 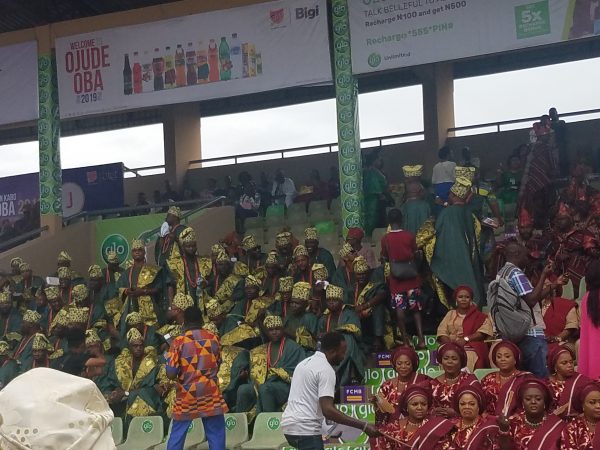 The festival has officially kicked off with the recitation of the Nigerian National Anthem, Ogun State Anthem and the Ijebu Ode Anthem.

The opening prayer by the Chief Imam of Ijebu Ode, Ogun State.

Sir Kessington Adebutu is the special guest of honour at this year’s festival.

The Alaperu of Iperu is representing the Akarigbo of Remo land.

Danofunjora, one of Oyo’s most prominent masquerades, thrilled guests at the Festival with a mindblowing performance of being set on fire and not getting burnt.

The masquerade was invited to perform at this year’s festival by the Alaafin of Oyo to pay homeage to the Awujale, Oba Sikiru Adetona, as the longest serving paramount ruler of Ijebu land.

According to the Alaafin, it is the culture of Dasofunjora, a deity and a well respected masquerade in Oyo State to perform and pay homeage to kings who rule for long periods of years.

Representatives from each of such horse riding families are selected to pay homeage to the Awujale.

The current Balogun of Ijebuland, Balogun Alausa is rounding off the horse ride display after paying homeage to the Awujale after which he will proceed to give with his speech.

Prof Toyin Ashiru read out the results of the Ojude Oba Competition of the different age groups, “the regbe regbe” on behalf of the panel of judgesfor this year’s festival.

The special guest of honour for the Ojude Oba 2019 Festival, Sir Kessington Adebutu was ably represented by Aare Bola Oyefeso who gave a short speech where he thanked the Awujale for the opportunity given to be the speaker.

In his speech, he prayed that the Awujale lives long in good health. He reiterated the uniqueness of the Ojude Oba. He donated the sum of N20 million towards the celebration of the festival.

The Awujale of Ijebuland, Oba Sikiru Adetona gave his speech at the ongoing festival.

In his speech, the Awujale saluted all the dignitaries present and also, the sponsors of this year’s event. He showed gratitude to everyone present and prayed that Ijebu continues to grow from strength to strength.

He also thanked Allah for giving him the grace to be present at the event, and also for the religious leaders for their prayers and support over him.

Awujale didn’t forget to recognize Gov. Dapo Abiodun and thanked him for being there for him, even before he became governor. He recounted that when he had to operate his leg, Gov. Abiodun was there to give him unflinching support.

The Awujale tasked the governor to look into the rehabilitation of roads and also improve the economy of the state.

He also thanked the new Akarigbo of Remo land while reitieriating his solid support for the Remo monarch.

Awujale also thanked the “regbe regbe” group sfor their support in the last elections and promised to host them in the not too far future.

Awujale prayed that when appointing the next Awujale, the people of Ijebuland should kick against politicizing its candidacy. He rounded off his speech by emphasizing that the next ruling house should ensure their candidate is up to the task, while ensuring the oneness of Ijebu indigenes.