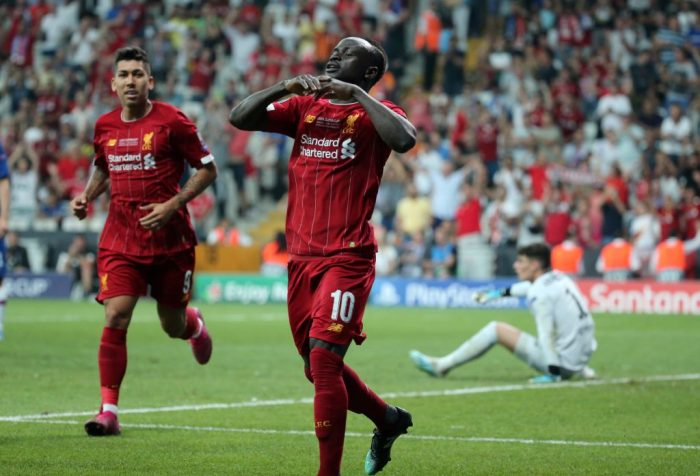 Liverpool defeated Chelsea 5-4 on penalty to win the 2019 UEFA Super Cup in Istanbul, Turkey on Wednesday.

At the end of 120 minutes, the game tied at 2-2, which necessitated a penalty shootout to decide the winner of the tournament.

Olivier Giroud had put Chelsea in the lead on 36 minutes. He was set free in the area by Christian Pulisic and made no mistake with a lovely finish into the bottom right corner.

On 41 minutes, Pulistic put the ball in the net for Chelsea, but the assistant referee raised his flag and the referee blew her whistle for an offside.

Sadio Mane equalised for Chelsea on 48th minute. Roberto Firmino, who came in as substitute  passed the ball to the feet of Mane, who had an empty net in front of him and had no problems in tapping the ball in.

Fabinho, on 50th minute received a precise pass on the edge of the box and released a promising effort. Unfortunately for him, his strike flew painfully close to the right post.

The match ended on 90th minute with no goal. It has to go into extra time.

On 95th minute, Mane made it 2-1 for Liverpool. Firmino passed the ball into the penalty area. Mane collected it and quickly drilled it into the roof of the net via the underside of the bar! The goalkeeper was helpless.

Tammy Abraham, on 98th minute took a wonderful touch after collecting a pass inside the box. He steered his low drive towards the right post, but the keeper dived low to keep the ball out.

Chelsea got a life-line on 99th minute after referee Stephanie Frappart gave a penalty.

Chelsea equalised on 101 minutes through Jorginho. The Chelsea player made no mistake from the penalty spot after waiting for Adrian to move before slotting the ball low into the middle of the goal.