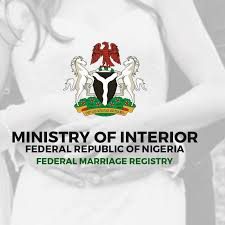 The Ministry Of Interior says that marriages conducted at unlicensed places of worship are a breach of the Marriage Act.

The Permanent Secretary, Ministry of Interior, Mrs Georgina Ehuriah, stated this during the South-South/southeast stakeholders’ conference on conduct of statutory marriage in Port Harcourt on Wednesday.

Ehuriah said that only 4,725 licensed places of worship in Nigeria had updated their records with the ministry, while 314 had renewed their licences to conduct statutory marriages.

“The implication of this is that marriages conducted in unlicensed places of worship are not in line with the Marriage Act and cannot serve legal purposes when the need arises,” she said.

Ehuriah stated that the conference would provide a veritable platform for stakeholders to initiate concrete steps to resolve all outstanding issues that had created unnecessary friction between the ministry in the exercise of its constitutional roles over time.

In his speech, Mr Stephen Okon, the Director, Citizenship and Business, Ministry of Interior, said that the conference was aimed at achieving the objectives of educating the public and creating awareness on the key requirements of the Marriage Act.

Okon further explained that the aim was to draw the attention of stakeholders and the public to the consequences of non-compliance with the law.

Apostle Stanley Dimkpa, the Rivers Chairman of Christian Association of Nigeria (CAN), said that Christians respected the law of statutory marriage because it was legitimate and constitutional.

Dimkpa urged churches to guide their members on the three types of marriages – traditional, statutory and church -, noting that there were some stringent positions which CAN had considered and would make its position known in a communique.