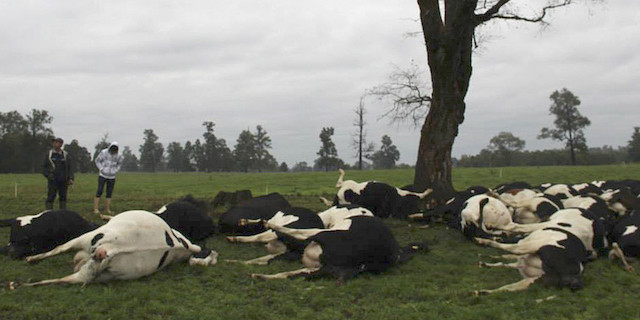 Just for Illustration. Above cows killed by lightning in Chile

Scores of cows have gotten electrocuted in the forest while grazing, a warning that animals are not immune to serious electrical faults or even deaths by the electrical sparks of nature, lightning.

It all happened in Kadta village of Madhya Pradesh’s Sagar district of India.

Now the local MP, Gopal Bhargava, a member of the ruling Bharatiya Janata Party (BJP)is threatening to attack the electricity board building.

Bhargava is seeking compensation for the owners of the cattle and warned the electricity board of severe protest.

In a video accessed by Asian News International(ANI), the Indian news agency, Bhargava, a legislator from Rehli Assembly constituency, can be seen intimidating the officials over the phone for not taking the responsibility for the incident.

“It was your task to supervise it. We want you to give compensation to the owners of the cows, otherwise, we will launch a protest and pelt stones at the building of the electricity board,” he said.

According to the sources, the animals allegedly died while grazing in a forest area. The herd stepped on the live wire, which had snapped from the electricity board.