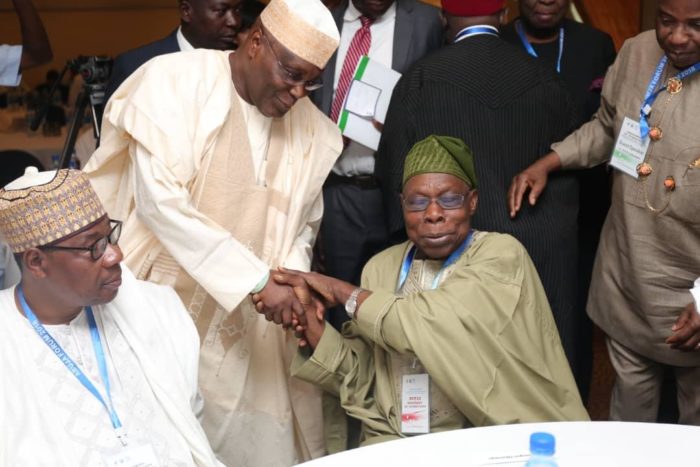 Atiku and Obasanjo: Atiku says money given Obasanjo Library was a donation

Former vice-president Atiku Abubakar has confirmed that some money was indeed given to the Olusegun Obasanjo Presidential Library, a transaction that has become part of the larger money laundering probe by EFCC of the €150million brought into the country by Atiku’s failed presidential campaign.

But he insisted it was a normal donation because the library is a not-for-profit organisation and that the donation was made via a bank cheque, and not cash of $140,000 that the EFCC is investigating.

The EFCC on 8 August extended to Olusegun Obasanjo Presidential Library, its investigation of the laundered 150 million euros cash-for-poll by associates of Atiku Abubakar.

EFCC investigators went to the Library to authenticate the claims by one of those under probe, Mallam Babalele Abdullahi, Atiku’s son-in-law, that he gave $140,000 (about N50 million) in cash to one of the library officials.

According to reports, the EFCC officials, accompanied by policemen, combed some offices at the former President’s Library.

“For the avoidance of doubt, Mallam Babalele Abdullahi, Atiku Abubakar’s son-in-law, did not donate any money in cash to the Olusegun Obasanjo Library. Yes, he did facilitate a donation of fifty million naira to the Olusegun Obasanjo Presidential Library, but so did many other individuals, including civic-minded traditional rulers, state Governors, bankers and captains of industry.

“This is because the Olusegun Obasanjo Presidential Library is a non-governmental organisation that plays a pivotal role in promoting peace and stability in Nigeria, and that should be applauded”, said the Vice President in a statement by his media office on Monday.

Atiku is also now reading a sinister motive in the EFCC leaking its probe to the press, by accusing the commission of trying to “cause disaffection and bad blood between him and the former President Olusegun Obasanjo.

Raising sentiments that Obasanjo founded EFCC, while in office, Atiku slammed the anti-graft agency for being a disappointment.

“An action such as this is tantamount to a river denying its own source, since Chief Olusegun Obasanjo is the fountain of origin of the EFCC, seeing(sic) as he founded the institution and nurtured it to maturity”.

He also sent a jibe to President Muhammadu Buhari, accusing him of not behaving like Obasanjo by establishing a presidential library.

“Unlike another past leader, who did not improve himself or Nigeria after leaving office, but sat down nursing grudges and plotting revenge, former President Olusegun Obasanjo improved himself and Nigeria by authoring books, founding international think tanks and engaging in peace and capacity building efforts.

“Donations to institutions set up to promote peace in Nigeria and Africa are to be commended, not criminalised. Presidential libraries in America and other parts of the world are similarly funded by donations from civic-minded individuals.

“For the avoidance of doubt, Mallam Abdullahi’s donation of fifty million naira was made via a bank transfer, in full compliance with the law. He did not donate or make any payment in cash, as the EFCC is erroneously and salaciously misleading the public. Furthermore, the sources of these funds are completely legitimate and have been conclusively proven to the EFCC. It is instructive to note that even the EFCC has not once claimed these funds to be the proceeds of any illegal activity whatsoever.

“The truth is that there is desperation on the part of the current administration to rope in former President Olusegun Obasanjo into a crime as a way of silencing his voice, which they see as the preeminent critical voice against the misrule that they have foisted on Nigerians.

“This is why they asked the Federal Inland Revenue Service to falsely and libellously include his name in a published list of tax evaders, along with the names of other Peoples Democratic Party sympathisers, such as prominent international singer and pride of Nigeria, Davido, who played a prominent role in PDP’s gubernatorial campaign in Osun state, for which he is being punished.

“We are therefore calling on Nigerians to be watchful for false and misleading stories planted in the media by the EFCC against Atiku Abubakar, former President Olusegun Obasanjo and other persons deemed to be opponents of this government.

“Let it be known that former President Olusegun Obasanjo established the EFCC to be an investigative body and not a propaganda or enforcement arm of the ruling party, as it is now being misused.

“May we also add that whenever the EFCC wish to come up with mischief, they fly their kite in The Nation Newspaper. This is now a pattern. It should be clear to Nigerians that the Presidency, APC, the EFCC, The FIRS and The Nation are now working together as five fingers of the same leprous hands”.