With Love from Yokohama: Femi Adesina 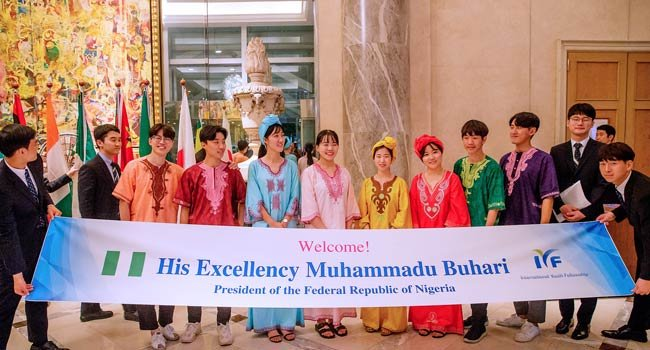 Japanese welcome for Buhari in Yokohama. The conference starts on Wednesday

Love in Tokyo is the title of a 1966 film that became a hit at the box office. Since then, when men and women, boys and girls show affection to one another publicly, you often hear “love in Tokyo.”

But we only landed in Tokyo, and took a 30 minutes drive to Yokohama, Japan’s second largest city. That is why instead of Love in Tokyo, the headline of this piece is With Love from Yokohama.

What am I doing in this port city of Japan, with a population of about 3.7 million people? Good question. I am here as part of President Muhammadu Buhari’s delegation to the Seventh Tokyo International Conference on African Development, otherwise known as TICAD7. It holds between August 28 and 30.

If you talk of a long-haul flight, this was one. A number of times, I have been to China. To India. To United States of America. Long flights from Nigeria, no doubt. But Japan now wins the diadem. Except I have the grace to go to Australia, New Zealand, and some other ends of the world countries in future, Japan is the farthest I’ve now done. About 17 hours in the air. Holy Moses!

From Abuja to Muscat, in Oman, where we made a technical stopover, to refuel and stretch our legs, it was 7 hours and 13 minutes. After about an hour, we were on the way again. Nine hours, 24 minutes, nonstop. You love to sleep? You will sleep till your eyes bulge. You love to read? You will read till you begin to smell of books. Love movies? You will watch, and watch, and watch, till you begin to imagine yourself as Sean Connery or Sylvester Stallone.

In the air, the time seems to crawl ever so slowly, even when your plane is flying at the speed of sound.

As the screen in the plane gives you an idea of where you are, it also gives a sense of deja vu. Places you had visited in the past. Muscat, in Oman was the same place we had stopped over to refuel in 2016, while returning home from an official visit to China. But this time, the airport was wearing a new look, with an ultra-modern terminal. Oil money at work. That is what a country gets when its resources are not looted blind. Kill corruption, otherwise, it kills your country.

Flying over Middle East, you recall trips to Qatar, Riyadh and Jeddah in Saudi Arabia, Dubai, Abu Dhabi, and many others. New Delhi also brought memories of search for Indian talisman during a trip in late 2015. Nearing Japan, when we flew over a place called Osaka, I remembered the young tennis sensation, Naomi Osaka, the first Japanese player to win a Grand Slam singles tournament last year, a feat she repeated at the Australian Open this year. Serena Williams is her role model, but that did not stop her from sensationally drubbing her idol. Great girl!

Flying over Beijing, Shanghai, Chengdu, brought back poignant memories of visits to those cities.

What can Nigerians expect from Yokohama? Our President is not just footloose, withstanding the rigour of long-haul flights for nothing. It is all about Nigeria, and her development. The conference is under the theme ‘Africa and Yokohama, Sharing Passion for the Future.’ It is the seventh in the series of what began as a once-in-five-years conference in 1993, but now holds every three years. It rotates between Japan and Africa, with the last held in Nairobi, Kenya, in 2016.

In Kenya, Japan had pledged $30 billion investment for the future of Africa, another $10 billion for infrastructure, and $500 million for vocational training of 50,000 Africans.

On Wednesday, President Buhari will unfold what Nigeria has gained so far from Japan, and of course, present fresh shopping bills. Yes, we can’t singlehandedly reverse the infrastructure deficit we have in Nigeria. We need help from credible places.

I hope to bring you developments on the sidelines of the conference. Keep a date with Japan File. There may even be a dose of Love in Tokyo, who knows.