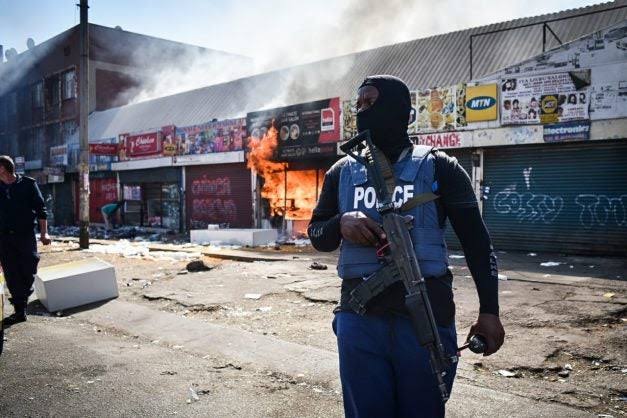 The Nigerian Union in South Africa (NUSA) gave the advice in the wake of Xenophobic attacks early Wednesday morning in that country.

“Violent looting and burning of foreign-owned businesses started in the early hours of today, Aug. 28, at the Pretoria CBD. The foreign-owned shops and offices were targeted by angry taxi driver rioters, the President of NUSA, Adetola Olubajo said in a statement.

“The violent revolt and looting have been fuelled by the death of a taxi driver allegedly by Tanzania nationals on Tuesday at Pretoria CBD.

“Not less than two buildings were burnt by the angry mob. This was done after the stocks in the various shops were looted by the rioters.

“The situation was very volatile this morning but the joint efforts of South African Metro Police and South African Police Service members helped to curb the violent looting and attacks, although the situation is still tensed at the area as several roads were blocked for motorists.’’

He said as at the time he sent the statement, only two Nigerian-owned businesses were identified to be affected, — furniture/electronics shop on Sisulu Street and Gold Exchange Business on Lillan Ngoyi Street were looted and burnt.

“Information reaching us is that some foreign-owned businesses have been marked to be attacked over the night.

“The Nigeria High Commission in Pretoria has been informed of the planned overnight attacks and looting of foreign nationals businesses.

Meanwhile, in a joint statement issued from the offices of Gauteng MEC for Public Transport and Roads Infrastructure, Gauteng Provincial Commissioner and Taxi Industry in Tshwane, said it was engaging with the taxi industry following the fatal shooting of a taxi operator in the Pretoria CBD.

“Gauteng Public Transport and Roads Infrastructure MEC, Jacob Mamabolo, together with the Provincial Commissioner of Police, Lt.-Gen. Elias Mawela on Wednesday engaged with the City of Tshwane as well as representatives of the taxi industry in Tshwane.

“This followed an incident on Tuesday afternoon where a taxi operator was fatally shot near the Bloed Long-Distance Taxi Rank in Pretoria.

“The taxi industry representatives tabled their concerns and raised what both the MEC and Provincial Commissioner believe are genuine concerns, which require urgent attention to ensure safety and security within the space in which they operate.

“The South African Police Service and the Tshwane Metro Police Department have since intensified deployments and will maintain a presence in the CBD to ensure that no further incidents of criminality recur,’’ the statement said.

According to the statement, the taxi industry representatives have distanced themselves from the incidents of looting that took place in the Pretoria CBD, and have reiterated on behalf of their operators that there was no aggression on their part.

“We had planned for a demonstration to highlight some of our issues with the shooting of one of us, and we believe some criminal elements took advantage and exploited our plan to advance their criminal intent,’’ it quoted Mr Mack Makata of SANTACO as saying.

It also said that Lt,-Gen. Elias Mawela made a commitment that police would look into the allegations and assured the taxi industry that feedback would be given in a short space of time.

“The taxi industry plays an integral part in the well-being of our communities, so, when they cry out for police attention, it is important that we respond positively and swiftly, in the best interests of the community,’’ said the Provincial Commissioner.

MEC Jacob Mamabolo extended his condolences to the family and colleagues of the taxi operator that was fatally shot, and urged the police to prioritise the investigation of the murder case so that the suspect could be found and taken to task