How Lionel Messi won UEFA Forward of the Season award 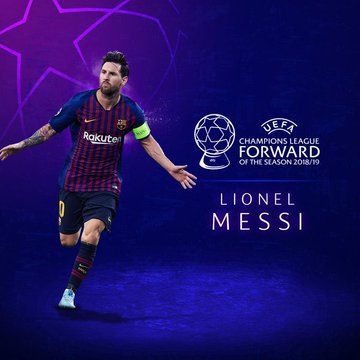 Lionel Messi has won the Forward of the Season award for the 2018/19 UEFA Champions League campaign.

The 32-year-old Argentinian had another dazzling season in Europe’s top club competition, finishing as the UEFA Champions League’s 12-goal top scorer even though Barcelona were eliminated in the semi-finals by eventual winners Liverpool.

Ernesto Valverde, Barcelona coach: “Messi is an extraordinary player from another galaxy. And it is not just that he is a goalscorer; it’s everything he creates, the goals he gives us, what he generates around him.”

Sergio Busquets, Barcelona midfielder: “It’s a pleasure to see him on a daily basis. The level of effectiveness he has in training and in matches is tremendous. He is fundamental at set-pieces, in open play – that’s why he’s the best player in the world.”

How Messi was chosen
The jury comprised the coaches of the 32 clubs in the 2018/19 UEFA Champions League group stage, together with 55 journalists selected by the European Sports Media (ESM) group, representing each of UEFA’s member associations. Coaches were not allowed to vote for players from their own teams.

Jury members chose their top three players per position, with the first receiving five points, the second three and the third one. The player who received the most points in each category was named the winner.

However, another Barcelona player, Frenkie De Jong won the Midfielder of the Season award but on the account of his success with his former club, Ajax FC.