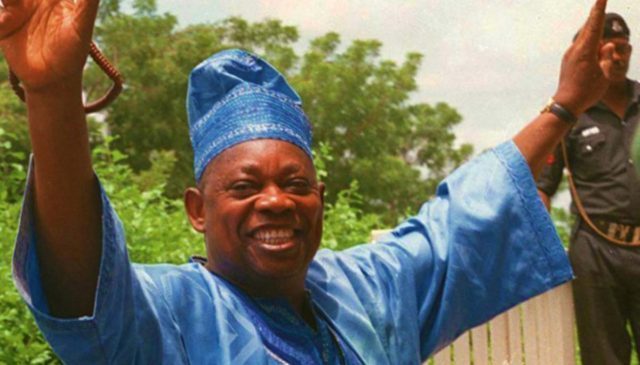 Is Frank Igwebueze in the house? Good morning Frank. I woke up this morning thinking of MKO Abiola and his philanthropic obsession. A particular incident involving you came to mind as I stepped into the bathroom and I started laughing. I do a lot of reminiscences these days and these bring smiles to my face and lighten my mood even when I am worried about some unsavory developments in our society.

What can one do now but be happy looking back at the varied experiences one has had in life?

Frank , I hope you still remember sometime in the early 90’s when the late musician Sunny Okosun was going on a trip to America and requested  for assistance from Abiola, your boss , our boss then. The lot fell on you to deliver the message from Abiola to Okosun. When Abiola handed over $20,000, or was it $25,000, in an envelope to you, to deliver to him, it was in consternation you said: Chairman, is this not staggering? “And he replied “there is nothing staggering in that Frank, you are the one staggering “. What a sense of humor? What a generous soul?

Such was the life of MKO. As his employees in the Concord Press we were served free lunch every day, quality food at that. At the beginning of the month we were handed a bundle of meal tickets. Every afternoon we proceeded to the cafeteria and present our ticket for the day and we were served our choice of meal. This must sound like fiction now or a tale from communist Soviet Union to present day journalists who are sometimes owed six months’ salary by proprietors who live large without giving a thought to it that an unpaid journalist is like a lethal virus to the society.

In 1989, as Chairman of Concord Chapel of Nigeria Union of Journalists, MKO one day gave me an appointment to see him in his Ikeja home at 9.00 pm. On the dot of 9.00 pm I arrived the house to receive a message that he had to attend to an emergency and I should wait for him. I waited until 1.00 am. At such late hour MKO’s house was filled with visitors and favor seekers from far and near.

With profuse apologies he attended to me. On my way out he asked: “how do you get home at this hour?” I replied that I would walk to the road and hail a kabukabu, the precursor of uber and taxify. He replied: “Ok I wish you good luck but see me in the morning tomorrow at 10.00 am.”

I was there at 10.00 am and MKO was waiting for me with a key to a Peugeot 504 car. I was shown to the car in his garage. “That is yours”, he said. I was dumbfounded. I could barely and coherently mutter “thank you chief”. I suddenly (out of joy and shock) became a stammerer like him. I was overwhelmed by the “staggering “ effect.

I had never driven a motor car before that day and had no drivers’ license. It was my first car.

I thought to myself, this car must leave this place with me this morning. There was no gambling leaving it behind!

I had watched people drove and observed the motion they made. I jumped into the car as if I was a Formula One driver. I took a look at the gear, the brake, and the clutch. I nodded to myself that I could do this. I would move this car. I maneuvered my way out of the compound, albeit with trepidation, with a deluge of sweat like someone in a sauna.