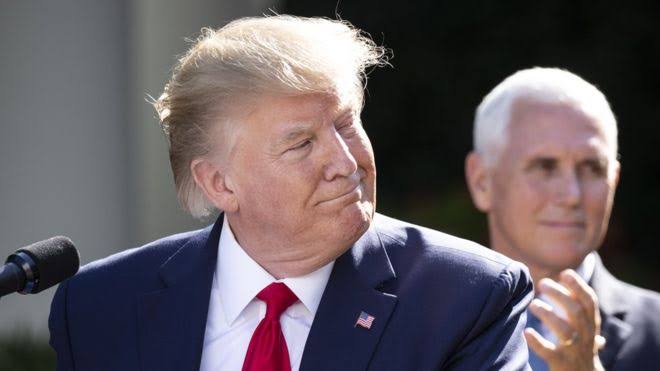 The Nigerian Diaspora Movement (NDM) in the U.S. says President Donald Trump’s new immigration policy will, over time, reduce the number of Nigerians in strategic professional positions in that country.

Chairman of the movement, Prof. Apollos Nwauwa, made this known in an interview with the News Agency of Nigeria (NAN).

A policy alert released on Wednesday by the U.S. Citizenship and Immigration Services disclosed the Trump administration’s plan to make it more difficult for the children of some U.S. service members and U.S. government employees living abroad to automatically become U.S. citizens.

The rule appears to primarily affect the children of naturalised U.S. citizens serving in the armed forces, who have not lived in the U.S. for a required period of time, a relatively small number — estimated to be approximately 100 annually, according to a Defense Department official.

It does not impact anyone born in the U.S.

U.S. citizenship can be acquired in a few ways, including being born in the country.

Children born abroad can acquire citizenship through their U.S. citizen parents either at birth or before the age of 18.

While the latest policy guidance does not make anyone ineligible for citizenship, it appears to narrow how children abroad can gain citizenship.

Trump has occasionally voiced his support for ending birthright citizenship and said last week that he was “seriously” considering ending it, though it is unclear how he would have the legal authority to do so.

This is because an Executive Order alone is not enough to make him have his way. Only a constitutional amendment can make the president have his way where ending birthright citizenship is concerned.

Acting USCIS Director Ken Cuccinelli said on Twitter that the new policy “does NOT impact birthright citizenship.”
Still, the policy, which takes effect on Oct. 29, sparked confusion among military and diplomatic groups who immediately denounced the alert.

The groups became concerned that the rule change would place hurdles before children of federal employees and military workers serving abroad.

According to Nwauwa, Nigerians in the U.S. are of significant value to the U.S, given that they constitute a large part of the human resource base of that country.

”There is hardly any American agency or parastatal that has no Nigerian working in its upper echelons.

“Since only citizens are permitted to work in sensitive and lucrative positions, over time, this policy will reduce the number of Nigerians in strategic professional positions in the U.S., ” he said.

He further said that the policy of restrictive citizenship would reduce the huge amount of remittances made by Nigerians living in the U.S. to the country’s revenue sources.

“Unquestionably, the long-term goal of the Trump administration is to reduce to the barest minimum the number of immigrants in his country.

“The policy will only briefly affect Nigerians visiting the U.S. to have babies.

”It will also have implications for American servicemen, business people, members of the diplomatic corps as well as others, who live outside the U.S. with their families.

“Nigerians who also have U.S. citizenship will be affected the most because their children born in their country of birth after they had become U.S. citizens by naturalisation, will not be granted citizenship.

“Trump’s administration is determined to change the U.S. immigration landscape once and for all,” he said.