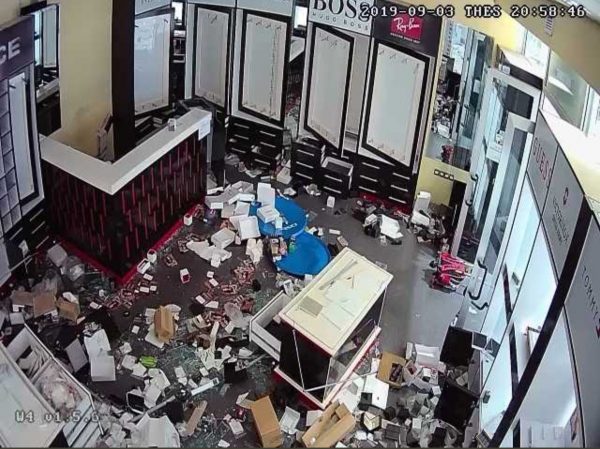 one of the shops vandalised at Novare Lekki Mall

A Nigerian has provided a shocking video of the looting of one of the biggest malls in Lagos, the Novare at Sangotedo, Lekki Lagos.

Some Nigerians who went there on Tuesday, claiming they were protesting against the attacks against Nigerians in South Africa, actually had another agenda in mind. They went there to loot the stores.

Shoprite is one of the stores in the expansive mall. The video shows the thieving protesters carrying a lot of items home.

Police apparently failed to offer the shops any protection.

Watch the video of the hoodlum-looters:

These people don cash out o My Goddd all in the name of fight against Xenophobia…. pic.twitter.com/qFLArOeYh1

On Tuesday night, traffic to the area, was grid-locked, with people spending hours to reach home.

There was also looting at the Adeniran Ogunsanya Mall in Surulere. The shops looted belonged to Nigerians.

At Circular Mall in Jakande-Lekki, the so-called protesters succeeded in ransacking the shelves of Shoprite, before the police and the military came in to protect the shop.

Watch the video by TVC: