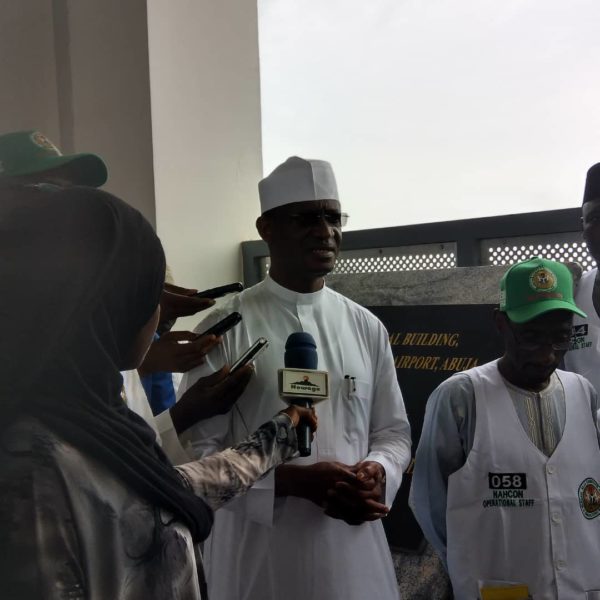 The National Hajj Commission of Nigeria (NAHCON) has concluded the transportation of pilgrims back home with the last flight NGL 2124 Max Air, signifying the end of 2019 Hajj operations.

Hajiya Fatima Usara, Head, Public Affairs of the commission, disclosed this in a statement in Abuja on Thursday.

She quoted the Chairman/Chief Executive Officer of the commission, Alhaji Abdullahi Muhammad as expressing gratitude to the Almighty for facilitating the successful conclusion, three days ahead of schedule.

The deadline earlier fixed to conclude transportation of pilgrims home is September 15.

The NAHCON boss congratulated and commended stake holders, such as pilgrims welfare board officials and their executives for their patience, dedication and support to their respective pilgrims.

“It is the commission’s prayer that the Almighty continues to guide all pilgrims’ operatives toward success in the discharge of their responsibilities to them,”Muhammad said.

He also commented Max Air and FlyNas for their efficiency in transporting pilgrims and their luggage safely to Nigeria within the fixed time.

Muhammad also gave kudos to Nigerian pilgrims for their civil conduct during the exercise, adding that they had carved a positive name for themselves in the host country.

“The same appreciation goes to accommodation providers in Makkah and Madinah, transportation providers, caterers in the two cities as well as Masha’ir and all NAHCON staff, members of the Ulama team, medical team, media, security as well as all other officials.” He said.

He noted that the stakeholders played their roles in the interest of Nigerian pilgrims, and prayed that each party involved in the success of the 2019 operations be rewarded with more successes in all their life endeavours.