I was busy with 2020 budget: Buhari shares moments of tribunal victory 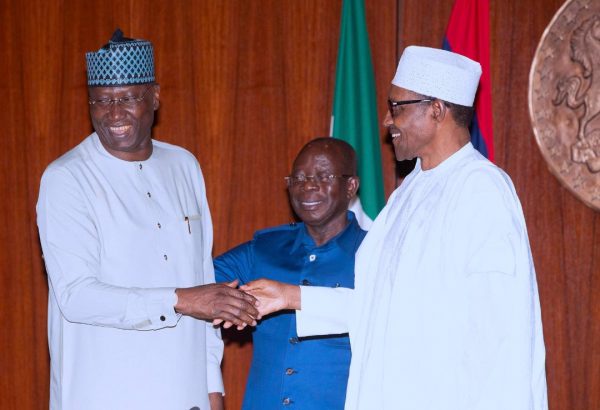 President Muhammadu Buhari has said the heavy schedule of the inaugural Federal Executive Council (FEC) meeting on Wednesday held his attention for many hours, keeping him from following the court ruling that validated his victory at the poll.

The president stated this when he received All Progressives Congress (APC) party leaders and members of the Progressives Governors’ Forum at the State House, Abuja, on Friday.

Buhari said he was happy with the outcome of the judgment, urging the governors to join hands in strengthening the party for the future.

“By some coincidence, this judgment came on the same day we had the first meeting of the Federal Executive Council that lasted for seven hours. I was very busy on that day.

“And our focus was on the budget for 2020. So while you were there at the court for nine hours of judgment, we were here for seven hours,’’ he said.

Buhari said the victory at the tribunal was collective as it affected all the party members, governors and Nigerians, pointing out that a contrary judgment would also have affected all members of the party.

The president told APC leaders and governors that there was a need to invest more in positioning the party for the future.

“We really need to institutionalise the party so that when we leave, the party will continue to lead,’’ he said.

The president said he joined the military “immediately’’ after secondary school and the reality of discipline carried him through his years of serving the country, including fighting in the war front.

In his remarks, the Chairman of the APC, Adams Oshiomhole, said the judgment was “eloquently and analytically” delivered to clear all doubts on the veracity of the president’s school credentials.

“We never had any doubt. We were convinced of our victory,’’ he said.

The Chairman of the Progressive Governors’ Forum, Alhaji Atiku Bagudu, congratulated the president on his victory at the tribunal.

While describing the judgment as clinical and with surgical precision in dealing with all the issues raised, Bagudu assured the president of the support of all APC governors and other governors that had benefited from his leadership.

“The APC governors are here today to celebrate the victory of the Presidential Election Petitions Tribunal which gave judgment on Wednesday.

“As said by the chairman, it was a judgment that is very pleasing to all of us and on behalf of all the APC governors, I say a big congratulation to you and to our party for this success,’’ he said.