Osimhen on fire in France 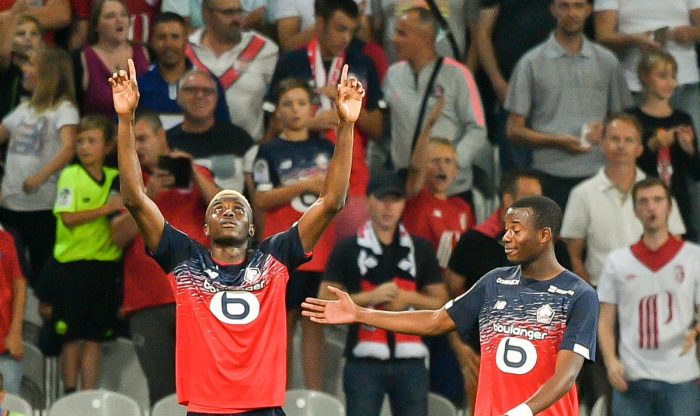 Victor Osimhen, left thanks God for another goal

Ligue 1 club, Lille are not missing their former forward Nicolas Pepe who moved to Arsenal, in the English Premier League. Pepe’s replacement, Nigeria international Victor Osimhen is just as good, if not better as he staked a claim to achieve one of the best Ligue 1 starts an African player has ever managed.

Osimhen’s goal against Angers in Lille’s 2-1 triumph on Friday means he becomes the first player to score at least five goals in his first five French top-flight outings, goal.com reported.

The 20-year-old, who got his first senior international goal against Ukraine on Tuesday, takes his place in the history books alongside, Mario Balotelli, who achieved the feat in 2010.

The youngster put the Great Danes ahead in the 39th minute after poking home from close range after Jonathan Bamba’s shot was spilt by goalkeeper Ludovic Butelle.

He is expected to lead the French outfit’s attacking line when they face Ajax in Tuesday’s Champions League opener at Johan Cruyff Arena before taking on Rennes on Sunday.