You will keep your wealth: Zimbabwean President assures Grace Mugabe 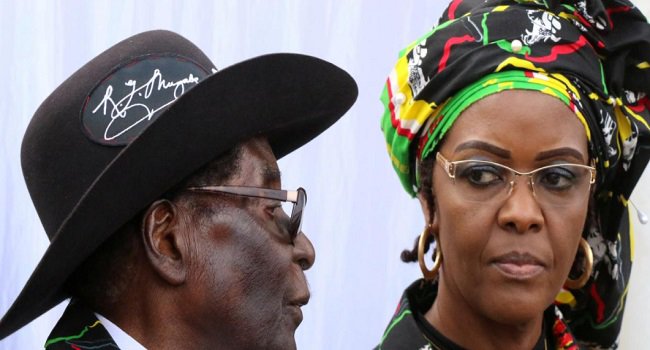 President Robert Mugabe and his wife, Grace, his preferred successor

Grace Mugabe, the widow of Zimbabwe’s former president Robert Mugabe, will keep the fortune accrued by her family during her husband’s 37 years in power, authorities said on Tuesday.

“President Emmerson Mnangagwa has assured the family that they will keep their wealth,” said Obert Mpofu, secretary for administration of the ruling party, Zanu-PF.

The Mugabes are one of the most affluent families in Zimbabwe, owning multiple properties, including a dairy farm, a private school, and a game reserve.

However, Mugabe’s villa, known as the “Blue Roof,” in Harare’s elite suburb of Borrowdale Brooke, and another mansion where their daughter Bona lives, are in Zanu-PF’s name.

Mnangagwa, whose challenge to Grace Mugabe’s leadership ambitions in part led to her husband’s overthrow by the military in 2017, had on several occasions said that the family would be taken care of.

“The title deeds will soon be transferred into the family’s name,” Mpofu said.

When asked, family spokesman, Leo Mugabe said that it was too early to discuss issues such as wealth and property.

“We are still mourning; we haven’t buried our departed; we cannot discuss that,” he told DPA.

Although Robert Mugabe presented himself as a socialist, his family secretly amassed vast wealth during his rule, and his wife, often dubbed “Gucci” Grace, was notorious for her lavish tastes and shopping sprees.

The controversial former leader, both revered for his liberation politics and reviled for his later dictatorial rule in the southern African country, died on Sept. 6, aged 95.