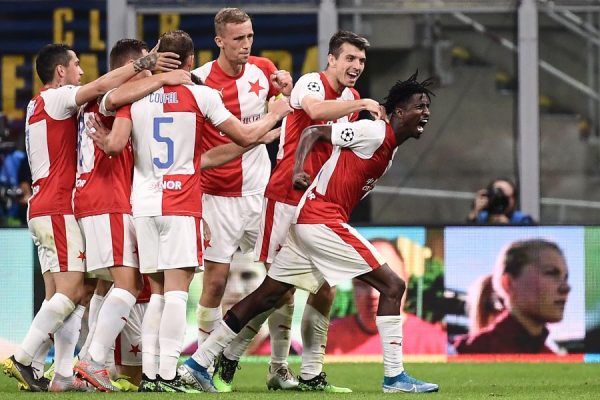 There will be at least one player of Nigerian heritage in every group of Europe’s elite competition this year.

Group A has Dennis Bonaventure, who made his Super Eagles debut against Ukraine, and David Okereke. They may experience some deja vu as they turn out in the blue stripes of Brugge, whom Amokachi also represented.

In Group B, Bayern Munich have David Alaba and Tottenham Hotspur have Dele Alli. Alaba represents Austria internationally and Alli turns out for England, but both come from Nigerian stock and Alli spent some of his formative years in Nigeria.

As for Alaba, he visited the Super Eagles at their pre-World Cup training camp in Austria in 2018 b

Former Olympic team invitee Iyayi Believe Atiemwen carries the Nigerian interest in Group C with Dinamo Zagreb, and Bryan Idowu, who appeared from left field to represent the Super Eagles at the 2018 World Cup, will fly the flag in Group D with Lokomotiv Moscow.

Forwards Paul Onuachu and Stephen Odey joined Racing Genk in the off-season, and they will shoulder the Nigerian interest against the likes of Liverpool. The reigning champions also have three players of Nigerian origin on their books, although not in their Champions League squad. All three are out on loan, with Ovie Ejaria at Reading in League 1, Sheyi Ojo at Glasgow Rangers in the Scottish Premiership and Taiwo Awoniyi at Mainz 05 in the Bundesliga.

Former 36 Lions forward Peter Olayinka turns out for Slavia Prague, the rank underdogs in Group F against three former champions Barcelona, Borussia Dortmund and Inter Milan. He even made record as the first UEFA Championship 2019 goal scorer on Tuesday night.

Fullback Tyronne Ebuehi, who has just returned from an ACL injury sustained playing for Nigeria at the 2018 World Cup in Russia, will have plenty of Nigerian following in Group G, in which he will play for Benfica. He is joined by RB Leipzig’s Ademola Lookman, who has expressed his interest in turning out for Nigeria from England.

Victor Osimhen is looking to transfer his sensational early season form for Lille in the French Ligue 1 into their UEFA Champions League campaign.

Rounding out the 100% Nigerian interest in the competition is red-hot Lille OSC striker Victor Osimhen, who will hope to carry his Ligue 1 goalscoring form into the world’s top club competition.

He will be up against Chelsea, where Tammy Abraham and Fikayo Tomori are both being eyed by Nigeria. After scoring a hat-trick for the Blues against Wolverhapton Wanderers last weekend, Abraham, whose dad is friends with NFF president Amaju Pinnick, refused to rule out the possibility of playing for Nigeria.l

Nigerians usually do not require much invitation to follow the UEFA Champions League, but having their countrymen involved in such historic numbers for the first time is bound to spike interest even further.