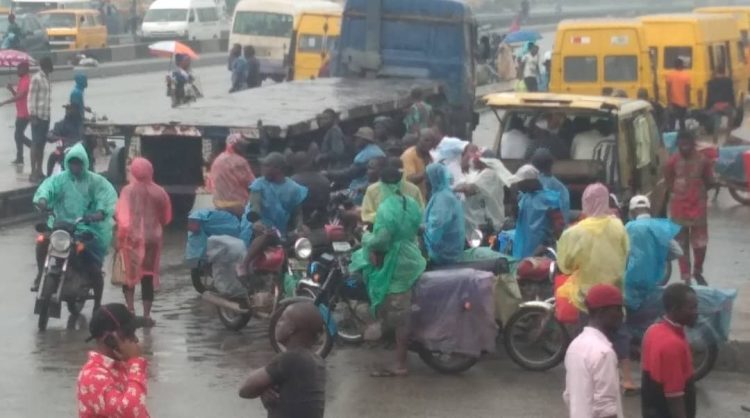 Many residents of Lagos have abandoned the conventional umbrellas for mini-nylon raincoats as rainfall persists in the city.

It was observed that traders, workers, school children, motorcyclists, security agents, and others now adorn mini-nylon raincoats anytime it rains. They wore the raincoats as an alternative to umbrellas and would go about their daily routines not minding the downpour.

The dress-like nylon raincoats that come in different shades and designs,  are worn by both genders. Before now, women used to wear shower caps made of nylons whenever it rains to protect their hairs from getting soaked.

Some of the mini-nylon raincoats are designed with headcovers and sleeves, while others are without such accessories.

Some of the residents expressed diverse opinions on why they resolved to use the mini-nylon raincoats to cover themselves from rain, instead of the conventional umbrellas.

Juliana Adiri, a petty trader who sells mini-nylon raincoats, told NAN that several Lagosians had embraced the product and that the sellers were smiling to their banks from their bumper sales.

Adiri said that she used to make good sales with reasonable profits whenever it rained because the mini-nylon raincoats served as quick raincoats for the ever-busy Lagosians who are always on the move come rain or shine.

“You can see school children and adults wearing the mini-nylon raincoats with joy instead of running from the rain or staying at home so that their bodies will not be soaked. I sell snacks and drinks but I still sell mini- nylon raincoats whenever it rains. I sell dozens and make my gains from them as they do not spoil easily,” she said.

Also, Ajibade Adedokun, a secondary school student, said that when he spread his umbrella when it rained; it covered only his head and the upper part of his body. He explained that his school uniform’s trousers used to be soaked whenever he used his umbrella whenever it rained.

Adedokun said that his mother bought him the mini-nylon raincoat and he preferred it as it is handy, covered his whole body and also protected his school bag from being soaked by rain.

“I love my mini-nylon raincoat and prefer it to the umbrella because it keeps me dry as I am wearing it now.

“It is protecting both my bag and uniform from the rain,” he said.

Similarly, Dele Oluwatobi, a motorcyclist, said that the mini-nylon raincoat had been helpful to the public.

He commended those who came with the initiative and for making it affordable and accessible for everybody, especially, during the rainy season.

Oluwatobi said that it was not convenient for those of them in the `Okada’ business to be carrying umbrellas while in motion.

He said that the introduction of the mini-nylon raincoats had erased such challenges and made riding `Okada’ in the rain easy.

“People have embraced the use of mini-nylon raincoats which sell for between N100 and N200 per pack. They are available everywhere, easy and free to wear and you can carry them about; that is not the case with an umbrella,” he said.

Victoria Osigwe, a bookshop owner, said she was fond of forgetting her umbrella during her business runs. She said that she could wrap her mini-nylon raincoat inside her bag.

Henry Ikechukwu, a businessman, however, said that the raincoat was not strong and not durable as it could tear easily if not properly handled.

“I have lost count the number of umbrellas that I had lost in the past. For this raincoat, you can fold and keep though, it is very fragile,” he added.

Meanwhile, Mrs. Ifesy Nwagu, a school proprietor, told NAN that the reason for the boom was because umbrellas had become too expensive for an average resident of Lagos.