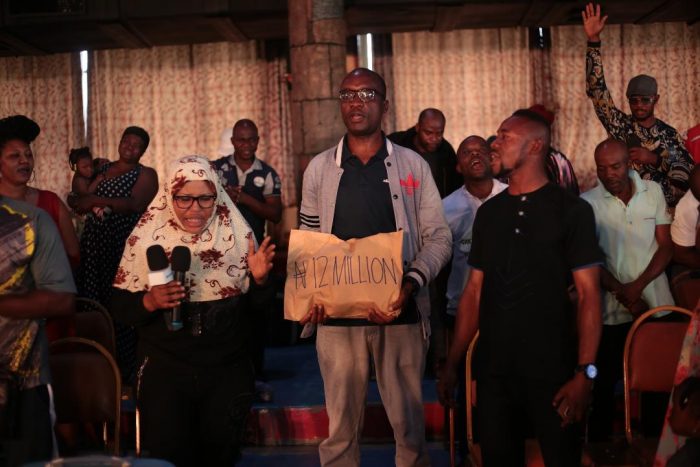 Some of the South Africa returnees at the Synagogue on Wednesday

Some of the Nigerians who returned from South Africa on Wednesday have narrated different experiences of how they lost their means of livelihood during the recent xenophobic attacks in the country.

About 314 returnees landed at the Murtala Muhammed International Airport, Lagos with the assistance of the Federal Government and a Nigerian carrier, Air Peace.

The returnees narrated their ordeals to P.M. News at the Synagogue Church Of All Nations, SCOAN, on Thursday where they got a cash donation of N12 million from Prophet T.B. Joshua and Emmanuel TV Partners.

Nwafor Patrick Ebuka, who was a taxi driver in Johannesburg said he was attacked while working, kidnapped by three men who drove him with his car to an unknown location and beat him mercilessly before they left him unconscious.

“They took me in my car where I was beaten. Later the police came and called the ambulance but the ambulance never came. They later told me to go home, that the injury was minor.”

“After that, I heard about the plan by federal government bringing people back to Nigeria and I quickly ran to the embassy. All the experience I had has affected me and that is why I came to this place to see Prophet so that he can lay his hands on me,” he added.

Another returnee, Ubah Okechukwu Stanley, who was a businessman from Imo State before leaving Nigeria for South Africa in 2017 said the xenophobic attacks were borne out of criminality that did not really have much to do with hatred of foreign nationals.

According to the 41-year-old resident of Richards Bay, “I don’t want to call this xenophobia – I would say some misguided individuals are using this opportunity to loot and take advantage of people, especially foreigners.”

“Several weeks ago, youths were going from home to home, mostly where foreigners were living. They would break in and loot everything. Because of this, I was homeless, sleeping on the streets for several weeks. I didn’t even take a shower for over two weeks or change my clothes. Some of us ran into the bush in fear of our lives.”

“Before that song of Prophet TB Joshua, there was anger within the Nigerian community. We were sending messages back to Nigeria, sharing horrible videos and calling on our people to revenge the attacks. But after that song, I was delivered from that anger, malice, grievances. It was a self-deliverance. I realised our enemy is not the physical appearance but a person without flesh or blood – spirit-beings.

“The cause of all this is misinformation within the jobless elements, but the greatest weapon to fight back with is love. After that song, I experienced calmness in my heart and calmness in the environment we were living in,” he added.

Another returnee, Blessing Emmanuel, a mother of two who lost her husband in the previous attack said, “I have two kids who I was struggling to care for and send to school. My husband was shot and killed during a previous xenophobic attack. I owned a canteen where I sell Nigerian food but the entire shop was destroyed in the attack.”

Blessing, however, said she has forgiven the attackers, after TB Joshua spoke on Emmanuel TV and “urged us to forgive and not harbour hatred.”

Kemisola Lawal, who had lived in South Africa for several years with her husband and three kids without any issue said everything went bad when her husband’s shop was set ablaze in the attack.

“On the 2nd September 2019, my husband was called that his entire shop had been burnt down. He started crying because we practically lost everything that day. In the ensuing chaos, he was shot with a rubber bullet in his hand and was injured,” she narrated.

Joseph Okondu on his part said, “Everything was fine in South Africa but things changed recently. During the xenophobic attack in September, my shop was broken into, looted and then set on fire. My house was also broken into and all the valuables were stolen. Because of fear, I ran away. As you see me now, I only have the clothes on my back. I didn’t bring anything with me from South Africa.”

Jeffrey Agowa, who was a car dealer and married to a South African, said his shop was burnt down with cars.
“More than 10 cars were completely burnt in that shop. The salon next to it was also burnt. That’s how I decided to return to Nigeria with the Air Peace flight.”

Precious Timothy, a gospel artiste while sharing his experience said, “My personal experience is that I went to South Africa to shoot a musical video as an upcoming Gospel artist. During the attack, my husband was seriously injured; he had a bloodied wound on his head.

“I saw the brutality, anger, and hatred but I realised the people perpetrating this are hoodlums, vagabonds and street boys – it does not represent the real South Africa. It was sad to see Nigerians, Zimbabweans, Malawians, Ethiopians running for their lives. We were thankful that Chief Allen Onyema sent a plane to South Africa to rescue us.”

While giving their testimonies, Nnabuche Wisdom, one of the returnees said he already made up his mind to come back to Nigeria to continue his interior decoration work but he does not have a dime to leave South Africa.

According to the 30-year-old Imo State-born, “I was thinking of escaping South Africa but I do not have any money as I have lost everything due to the xenophobic attacks. On the 12th of this month, I was checking the internet when I saw this industrial machine that I like. It costs N102, 000 but I don’t have the money.”

Another returnee, Ipaye Joke who is pregnant returned with his husband and their two kids. They also got N250,000 to start their life back.

“Thanks to Chief Allen Onyema for sending his plane to carry us and the second person is TB Joshua, may God bless him more. Now, I have hope to buy baby things for my unborn child and put my children back to school,” she said.