Thousands turn out for school climate strikes in Australia 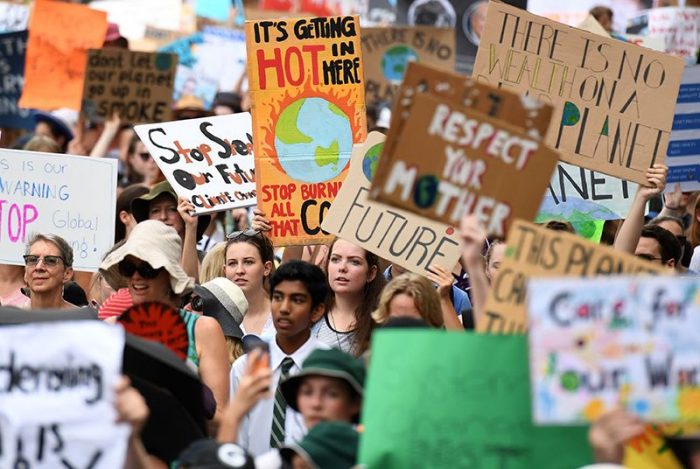 School pupils went on strike in their tens of thousands across Australia on Friday to protest against a lack of action by leaders on climate change, in what is thought to have been the youth movement’s biggest rally in the country yet.

Sydney police said 50,000 took part in the demonstration in Sydney’s Domain Park. However, the Domain and surrounding parks can hold 100,000 and the area was packed as students, parents, concerned adults, unionists and office workers joined the climate change rally.

Many students defied their school principals to leave school in their uniform to attend the rally, some with parents but many in groups.

Freya Croft, 16, from Stella Maris College in Sydney’s beach suburb of Manly, told dpa there was no point obeying the school when the world was falling apart.

“Our Earth is being destroyed and they say stay in school, get good marks, but what is the point of that if our future is being ruined,” she said.

Sara Angelini, 15, from Ryde Secondary College, came with her twin sister Sofia to hold up a sign declaring “There is no Planet B.”

“The water is rising, temperatures are rising, droughts are longer and harder, we need to act now before it is too late,” she said.

“The school will hold its own rally in the playground for those who couldn’t come to the city rally today. They are right behind it as it is our future.”

Vanessa Dawson came with her 12-year-old daughter Milly, carrying a sign saying “Sorry I can’t go to school, I have to save the planet.”

One youngster inside a dinosaur costume held a sign reading “We thought we had time too!”

More than 2,500 businesses across Australia registered their support with the strike website.

Many told employees they could stop work and join the rally and adults seemed to outnumber students at the Sydney event.

The official website of the Australian climate strike demanded no new coal or gas projects and 100 per cent renewable energy by 2030.

In Hobart, 22,000 turned out and even in Alice Springs, in the remote centre of the continent, 500 students rallied in the town centre, according to estimates carried by the national broadcaster ABC.

Australian Education Minister Dan Tehan condemned the strike, declaring in Canberra that “politics should be kept out of the classroom,” ABC reported.