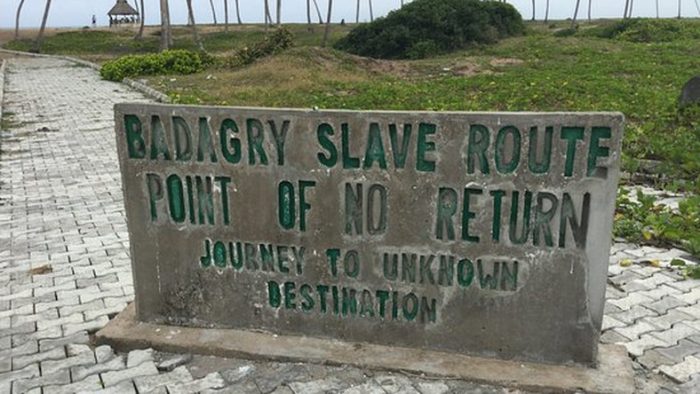 A Caribbean tourism team has visited slave sites in Badagry to commemorate 400 years since the first slave ship with African slaves docked in America in 1619.

Badagry, which is west of Lagos on the Atlantic Ocean coast, is a key departure point for slaves.

Millions of Africans, mainly young males and females were taken into slavery to Europe, the Americas and the Arab world in a bitter experience that lasted for hundreds of years, according to history.

The visit by the Caribbean Tourism Organisation is to familiarise the team members with the slave history of the ancient town.

The visit, late on Friday, was in preparation for the Africa Diaspora Conference, lined up for the 15th AKWAABA African Travel and Tourism Market, slated for this week in Victoria Island, Lagos, according to the News Agency of Nigeria (NAN).

AKWAABA is also to commemorate four centuries of the African experience in slavery, a trade that dehumanized Africans in various European, American and Arab countries for centuries.

The sites visited by the team, include the Akran of Badagry Palace, Point of no Return, Point of Return now under construction, Badagry Slave Route and the Badagry Local Government Secretariat.

She advised Africans in the diaspora to retrace their roots to get united with their families and friends to achieve common African goals.

“This is an amazing experience and I will advise other Africans in the diaspora to retrace their steps to their root,” she stated.

Similarly, Dr Kerry Hall, Director of Tourism Development in the Barbados Ministry of Tourism and International Transport, described the history of African slavery as painful and tragic.

She said that her visit to Badagry was revealing.

“This is a dream come through for me because this is what I have always wanted to do.

“I will continue to visit more African countries and I advise other Africans in the diaspora to do same,” she said.

The tour guide, Mr Anago Osho, explained issues relating to the slave trade, including the cuisines and fish farming in Badagry.

Osho said that Badagry was known to have different species of coconut, brought from different countries, including Togo, Ghana, Benin Republic, Cote d’ Ivoire and other countries.

Earlier, the Akran of Badagry, Aholu Menu-Toyi 1, welcomed the team to his palace and explained some historical issues.

The monarch was given an award of being among 100 Global Tourism Personalities by Mr Ikechi Uko, the organiser of AKWAABA, who also acknowledged the monarch as the custodian of diaspora history.

The monarch commended the efforts being made by the AKWAABA team in sustaining African experience and memories of the slave trade.