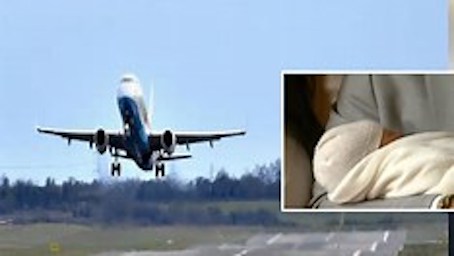 Illustration of a plane and a baby

A Manila bound flight made an emergency landing at Rajiv Gandhi International Airport (RGIA) in India on Saturday after a female passenger delivered a baby inside the plane.

The woman and baby were shifted to Apollo Hospitals in Jubilee Hills in Hyderabad, capital of the Indian state of Telangana. The flight was heading to Manila from Dubai.

Thehansindia which reported the emergency landing did not indicate the airline.

On May 8, another plane bound for the Philippines, made an emergency landing at the Rajiv Gandhi International Airport, Shamshabad, after a woman developed labour pains on board.

Doctors who raced to the airport delivered the baby girl inside the plane. Later the mother and the baby with umbilical cord intact were shifted to Apollo Cradle, Jubilee Hills.