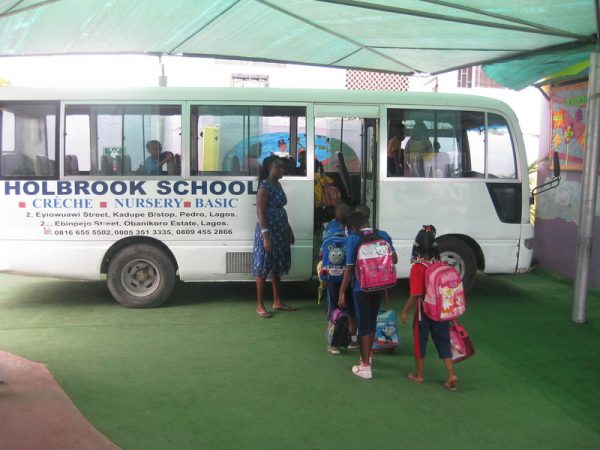 A Holbrook school bus: a driver docked for defiling a two year-old child

A woman on Monday told an Ikeja Sexual Offences and Domestic Violence Court that her two-year-old daughter was defiled by one Afeez Balogun, a 27-year-old bus driver of her school in Lagos.

The woman made the allegation while testifying as the first witness for the prosecution during Balogun’s trial for allegedly defiling the child in the premises of the school.

While being led in evidence by Mrs. Fehinti Ogbemudia, the prosecution counsel, the woman said that the defendant was a school bus driver for Holbrook School, Gbagada Lagos, her daughter’s former school.

She noted that the alleged defilement occurred in 2018 when the child was two-years-old.

“He (Balogun) was the bus driver for my daughter’s former school called Holbrook Schools located at Gbagada. My daughter is currently three years and 11 months old and she is currently in Nursery.

“On July 5, 2018, my daughter woke up to ease herself at around 00.30 am and while she was easing herself, she was crying and her terminology then was that ‘my bum-bum is paining me’.

“I tried to find out what the problem was and I took her to the bedroom and my husband and I asked her some questions and I asked her if anyone had hurt her bum-bum and she said yes,” the mother said.

She told the court that she went to the school with her daughter that morning and informed the school’s administrators about the development.

“At the school, they brought all the male staff and she (the complainant) was asked to identify who had hurt her and she identified Mr Afeez Balogun by running straight to him.

”That was the first time she identified him,” she said.

The witness told the court that the fateful morning after leaving the school; she went to the Office of the Public Defender (OPD) with her daughter where an officer was assigned to their case.

She said her daughter was asked for the second time at the OPD who had defiled her and she again identified the defendant.

The mother said that they were referred further from OPD to the Mirabel Center, a sexual assault referral facility located at Lagos State University Teaching Hospital (LASUTH).

“At Mirabel Center, some doctors examined her and they identified bruises and they said there were signs of forced entry in her private part,” he said.

The mother also told the court that at the Gender Unit of the Ikeja Command of the Nigeria Police Force, her daughter for the third time positively identified Balogun in a police lineup.

She said that the defendant was also taken to Pedro Police Station where another police lineup was conducted.

“At Pedro Police Station, she again pointed at Mr Afeez Balogun making it four times that she identified him as the person who hurt her. That was when he was arrested,” the mother said.

While being cross-examined by Mr Quddus Mumuni, the defence counsel, the mother informed the court that the medical tests conducted on her daughter had revealed that there were fresh and old bruises on her daughter’s private part.

She also said when she was questioning her daughter about who allegedly defiled her, her daughter due to her young age, had referred to the defendant as Mr Wale, another teacher at the school.

“The defendant is not Mr Wale but she referred to him as Mr Wale several times. I also did not ask my daughter questions at the various identity parades,” she said.

According to the prosecution counsel, the defendant committed the alleged offence in July 2018 at Holbrook Crèche Nursery and Primary School, Pedro, Gbagada, Lagos.

“Balogun defiled the complainant, who was two-years-old at the time by having unlawful sexual intercourse with her,” Ogbemudia had said.

According to her, the offence contravenes Section 137 of the Criminal Law of Lagos State, 2015 which recommends a life sentence for any individual found guilty of defiling a minor.

Justice Abiola Soladoye adjourned the case till Nov. 20 for the continuation of the cross-examination of the witness while the defendant remained in prison custody.